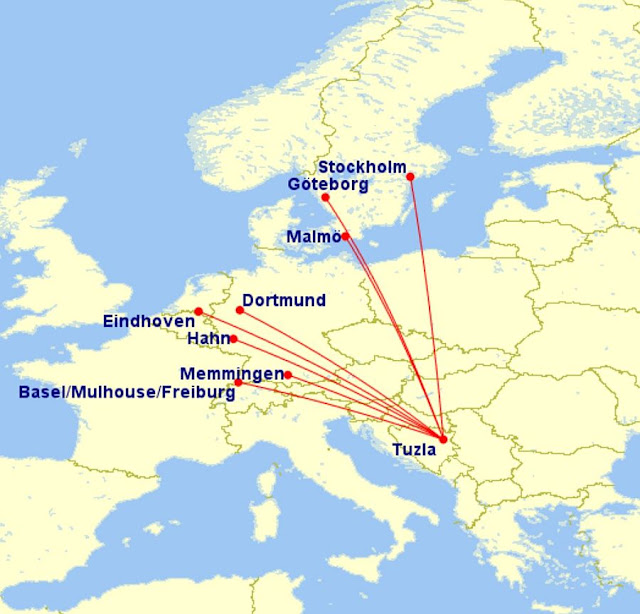 During the month of February  Wizz Air will operate a total of 68 scheduled flights to eight destinations in Germany, Switzerland and Sweden with a total of 12.240 seats on offer. 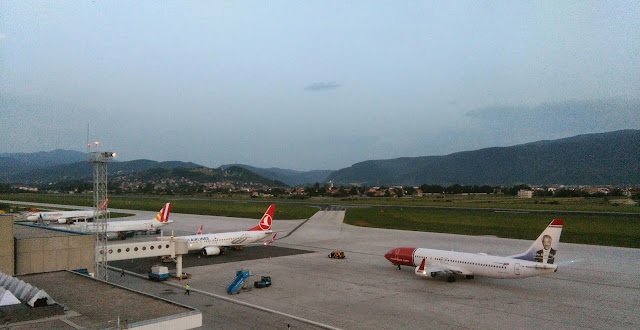 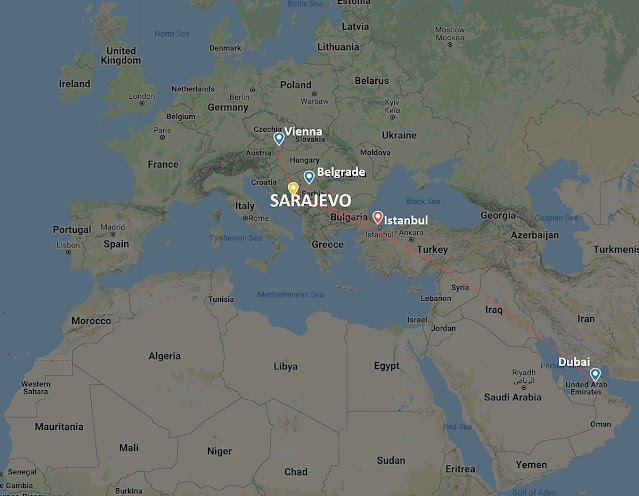 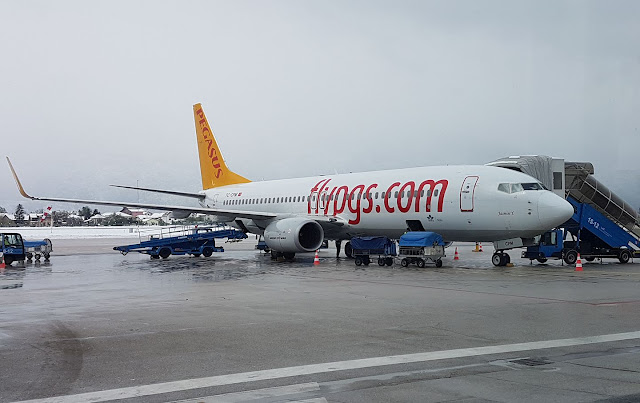 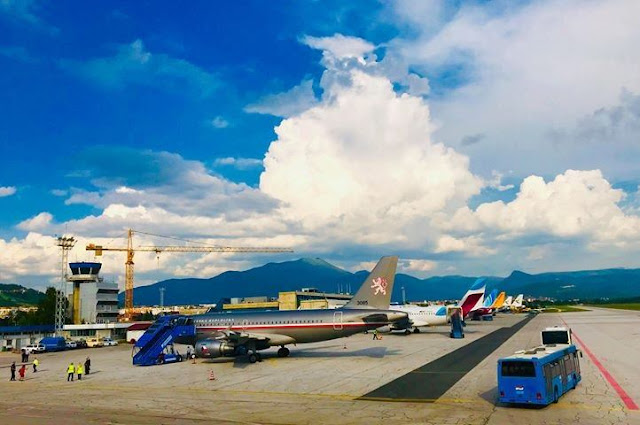 The Government of Federation of Bosnia and Herzegovina has passed a Decision to delay collection of dividends from the public enterprise Sarajevo International Airport for a period of ten years.

The Government of Federation of Bosnia and Herzegovina, in exercising the authority of the Assembly of the enterprise of Sarajevo International Airport, will not make decisions on the distribution of profits for the payment of dividends or profit-sharing, from undistributed (accumulated) profit reported in the business books on December 31, 2020, or from the profit realized for a period of ten years after the adoption of this decision.

The proceeds will be used to finance investments determined by the business plans of the Sarajevo International Airport.

The decision was made after Sarajevo International Airport was forced to stop a significant number of ongoing investment projects due to coronavirus pandemic. The Government’s  decision is especially important for future airport development. 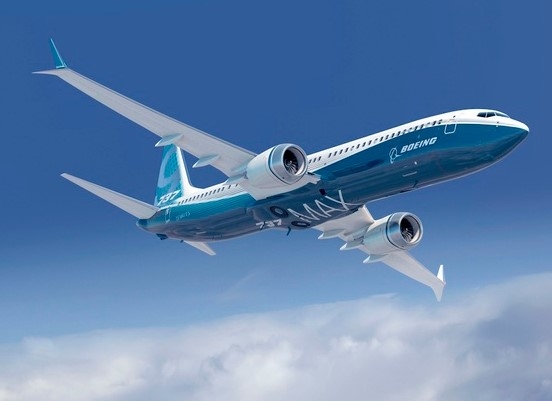 In accordance with Article 73 of the Aviation Law of BIH (Official Gazette of BiH 39/09 and 25/18) and Article 51 of the Rulebook on oversight in civil aviation (Official Gazette of BiH 22/16, 24/18, 55/18 and 5/19), as well as EASA Safety Directive No 2021-01, the Bosnia and Herzegovina Directorate of Civil Aviation has issued a safety directive allowing Boeing 737-8 MAX and Boeing 737-9 MAX aircraft to conduct commercial air transport operations over and above the territory of Bosnia and Herzegovina. 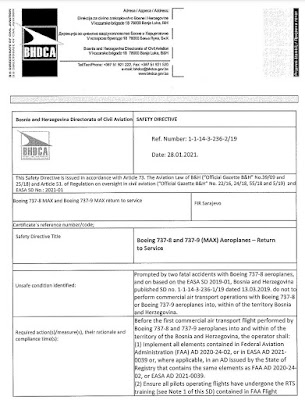 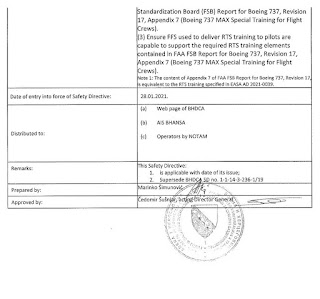 Before conducting the first commercial air transport flight by means of such aircraft over and above the territory of Bosnia and Herzegovina, the aircraft operator shall meet certain conditions specified in the safety directive, in accordance with the elements contained in the directives of the Federal Aviation Administration (FAA) and the European Aviation Safety Agency (EASA).

Please note that in March 2019, after EASA and other countries had done so, the BHDCA also passed a safety directive which suspended flight operations of Boeing 737-8 MAX and Boeing 737-9 MAX aircraft over and above the territory of BIH, on the occasion of two aircraft accidents involving these aircraft types.

During the last year only 523.413 passengers traveled through the Bosnian airports. The year 2020 started with solid increase in passenger numbers during January and February but global pandemic has put stop to that. All four international airports in Bosnia and Herzegovina were closed for regular passenger  flights for two months (April and May). Recovery during summer months was short lived and mostly concentrated at Sarajevo and Tuzla airports. Banja Luka airport passenger numbers were minimal while Mostar airport did not see any regular passenger flights. 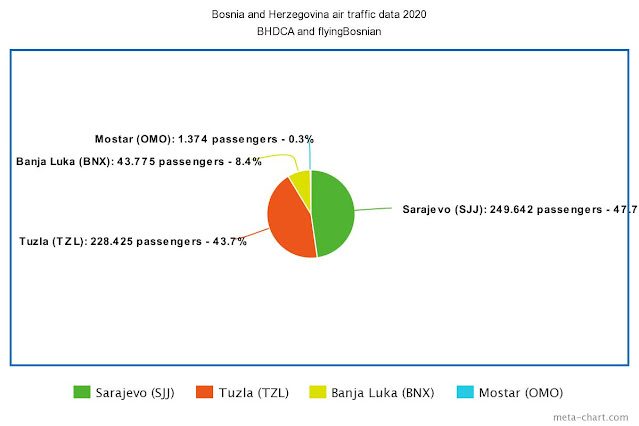 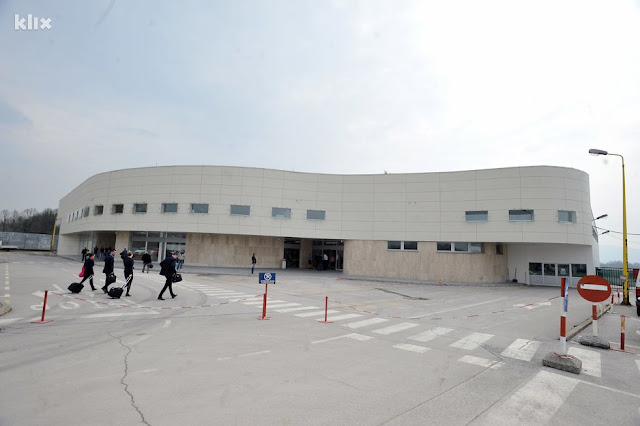 From Friday - January 29, 2021, a "Rapid Covid-19 test center" will be established at Tuzla International Airport, ready for rapid antigen testing of passengers on Covid-19. More information on availability, reservations and other details can be obtained by calling the phone number: 00 387 35 416 601 (available on weekdays from 08:00 to 16:30).

✈Sarajevo aims for two based aircraft; what routes are most likely?

Sarajevo in talks with a “successful European airline” for two based aircraft. It is very keen, so whoever it is – perhaps Wizz Air or Ryanair, or a strong regional operator – would probably get an excellent deal.

Sarajevo’s keenness is from the end of scheduled flights with FlyBosnia, although it was reported in December that the carrier is to lease three A320s – replacing its sole A319.  Given the on-going issues between the carrier and airport, its resurgence will be separate to the tender. 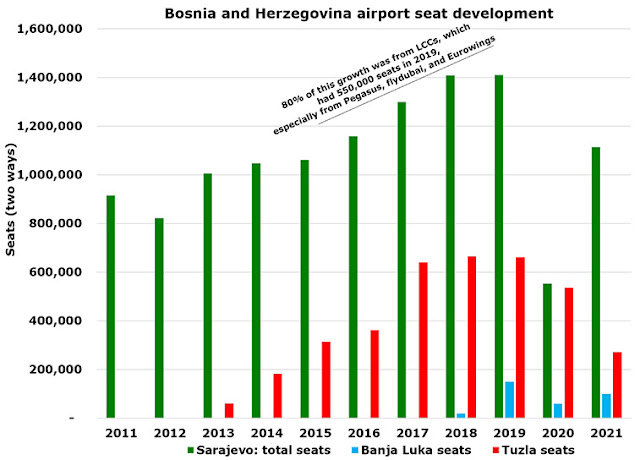 Pre-coronavirus, Tuzla had over 660,000 seats, around half of Sarajevo’s capacity and more than the capital’s LCC seat volume. Source: OAG Schedules Analyser.

Sarajevo’s desire for based aircraft is from the fast growth of Wizz Air at Tuzla, located some 119 kilometers away, and to a much lower degree Ryanair at Banja Luka (241 kilometers).

Sarajevo is very underserved, with over half of its traffic flying indirectly in 2019, booking data shows.

Up to 21 routes likely for Sarajevo 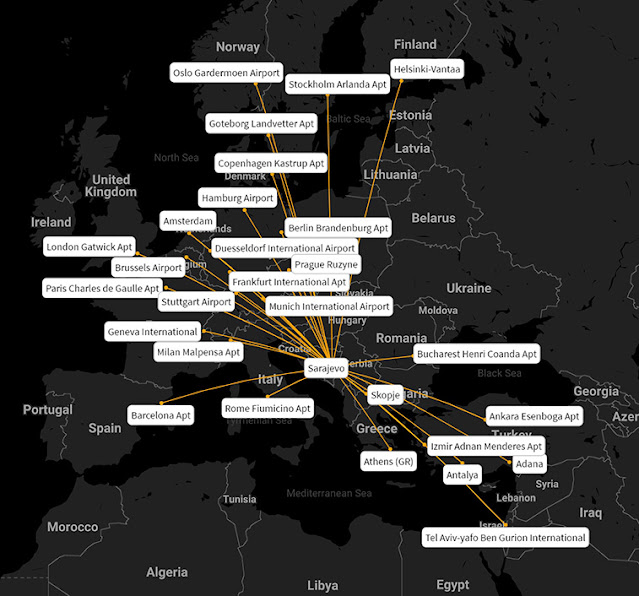 These are Sarajevo’s top unserved or very unserved markets in 2019 based on booking data obtained via OAG Traffic Analyser. Note that any specific airport, like CDG or Gatwick, is just a proxy for the whole city.

Assuming two aircraft and a ULCC, which would make the most sense, it could have 14 to 21 routes, each at three- or twice-weekly.

The markets illustrated below are Sarajevo’s largest unserved and those very underserved. They are based on Sarajevo’s traffic only and exclude leakage to Tuzla and Banja Luka and bus traffic.

Most are about Bosnian VFR, especially Germany, Switzerland, and Scandinavia.

The Turkish opportunities are very unlikely as the winning carrier won’t have a Bosnian AOC, but they have strong P2P demand before stimulation. For example, 17,000 for Ankara and 13,000 for Izmir.

From Sarajevo, most routes would be within the LCC sweet spot of one to two hours, meaning more sectors per aircraft per day and therefore more passengers and more negotiating ability.

Ryanair has suspended flights from Gothenburg to Banja Luka as of yesterday. Gothenburg was the only route operated by the airline from Banja Luka. Ryanair plans to resume flights during summer timetable even though the date has not been set yet.

Ryanair planned to operate seven routes to five countries with beginning of summer timetable from March of 2021, but due to ongoing pandemic and uncertainty over the air travel restriction and border crossings this is to be determined as we approach the month of April. The flight booking on airline’s website is not available for Brussels Charleroi, Gothenburg and Milan Bergamo. 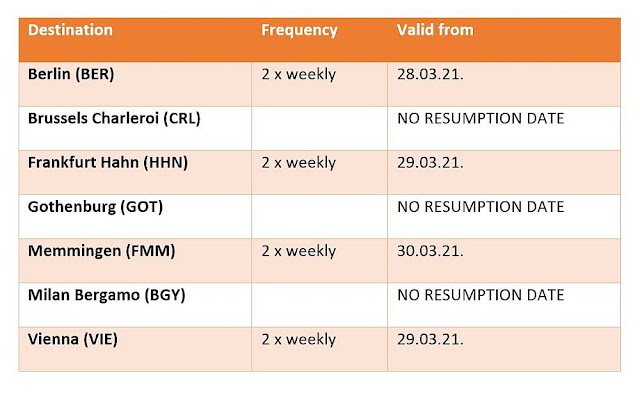 City of Sarajevo and Sarajevo International Airport photos taken from air onboard of Cessna 172 (E7-AAM) by Fahrudin Kreštalica on January 06. 2021. 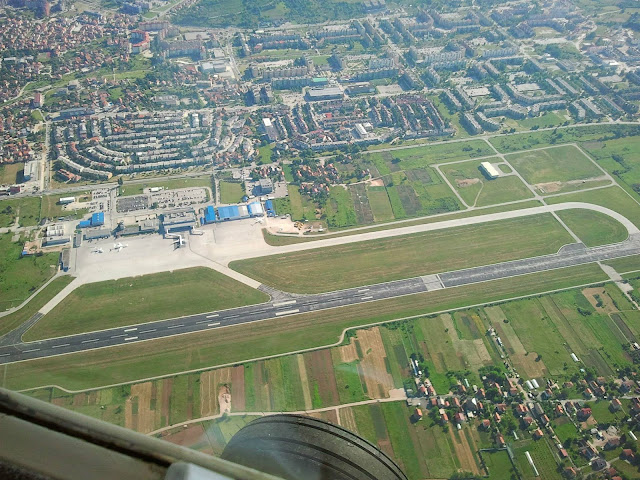 Sarajevo International Airport handled a total of 249.642 passengers last year representing a decrease of 78% compared to the 2019. The number of aircraft operations decreased by 57%, from 13.671 in 2019 to 5.896 in 2020. Processed cargo recorded a drop of 2%, handling 2.461 tons of cargo in 2020, compared to 2.523 tons of cargo in 2019. Due to the global pandemic air travel has suffered big losses forcing airlines to cut and discontinued many routes but fortunately  the airlines operating at Sarajevo Airport prior pandemic are planning return during 2021. Sarajevo Airport was in the middle of major expansion with plans to finish all the projects before summer 2020 but global pandemic has put stop to all of that. 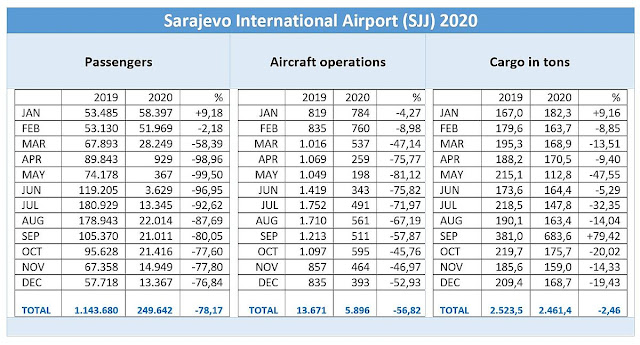 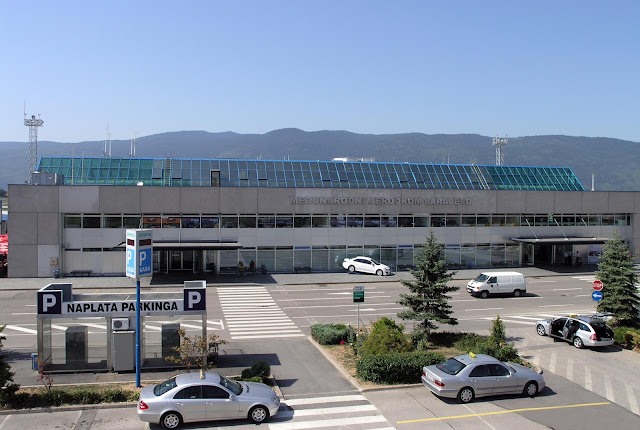 Sarajevo International Airport successfully completed accreditation activities under Airports Council International (ACI) program for accreditation of health services at airports. After reviewing the evidence presented through the evaluation process, Sarajevo International Airport has shown and proved to provide a safe environment for all travelers, in accordance with the recommended health measures established in ACI Aviation Business Restart and Recovery guidelines, ICAO Council recommendations and in compliance with best practices in the industry. 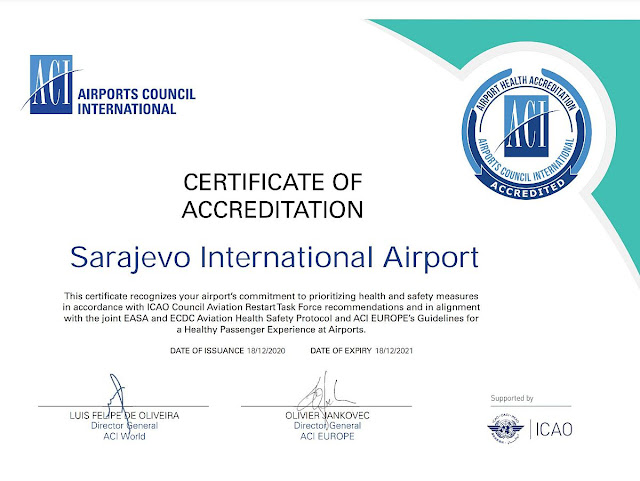 ACI’s Airport Health Accreditation Program enables the airport operators to determine whether the established health measures at the airports are in compliance with the recommendations by ICAO's task force for recovery of aviation, CART (Council Aviation Recovery Task Force).

Substantially, the benefits of health accreditation include the possibilities of the airport operator to:

After awarded accreditation, the airport operator regularly carries out an independent monitoring of implemented health measures and it renews the accreditation annually, through the process of reaccreditation, demonstrating a continued compliance with the requirements of the program . 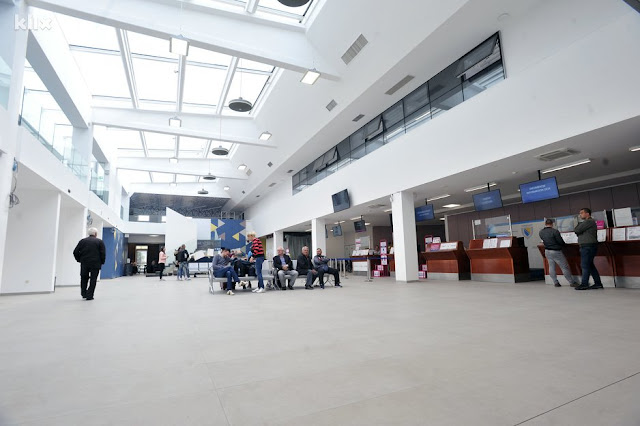 Tuzla International Airport handled a total of 228.425 passengers last year representing a decrease of 61% compared to 2019. Due to the global pandemic air travel has suffered big losses forcing airlines to cut and discontinued many routes but compared to airports in the region Tuzla Airport had solid year when comes to the number of passengers handled considering global pandemic and travel restrictions. The year ahead should be year of recovery with all the routes resuming from Tuzla at the beginning of summer timetable, first week of April. Tuzla Airport is expecting to handle 400.000 passengers this year, while 2019 passenger numbers are expected to be reached in 2022. 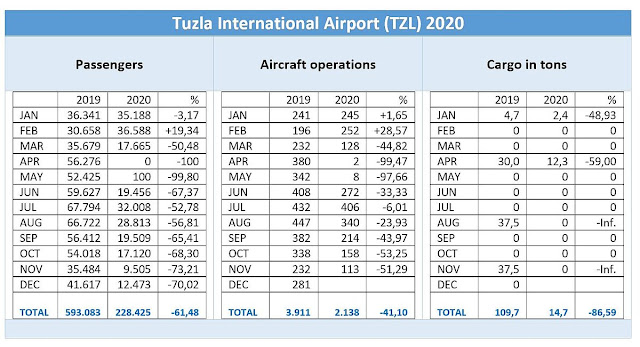 ✈ 25 million Marks for the construction of Bihac Airport 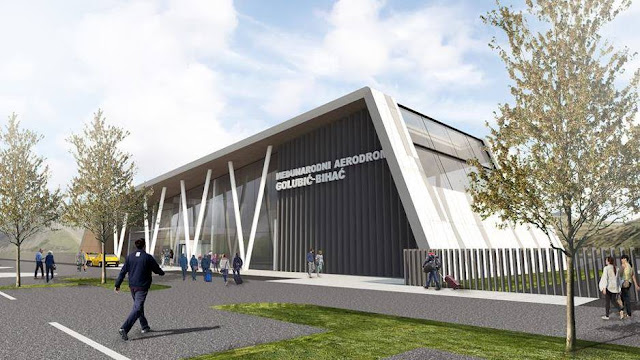 Federation of Bosnia and Herzegovina House of Representatives adopted the Budget for the year 2021, within which 25 million Bosnian Marks (12,7 million Euros) is intended for JP Aerodrom Bihać (Public Enterprise  Bihac Airport) on behalf of capital transfers to public companies based on the improvement of air traffic in Bosnia and Herzegovina.

The mayor of Bihac, Šuhret Fazilić, emphasized how strategically important this project is:

"This kind of project will revive us,  because it is of great importance for our city and canton connectivity. Our county has largest number of people living abroad, who are using Zagreb Airport as alternative for travel. Also, the development of tourism largely depend on new airport, we could immediately redirect some flights that now come from Turkey to Sarajevo, and go by bus to Bihać. Una National Park, as a carrier of tourism for the Una-Sana County with new Bihac Airport airport would completely revive this area. I am glad that the Government of the Federation of Bosnia and Herzegovina has included Bihac Airport in  strategic projects and allocating funds for the construction of the airport”.