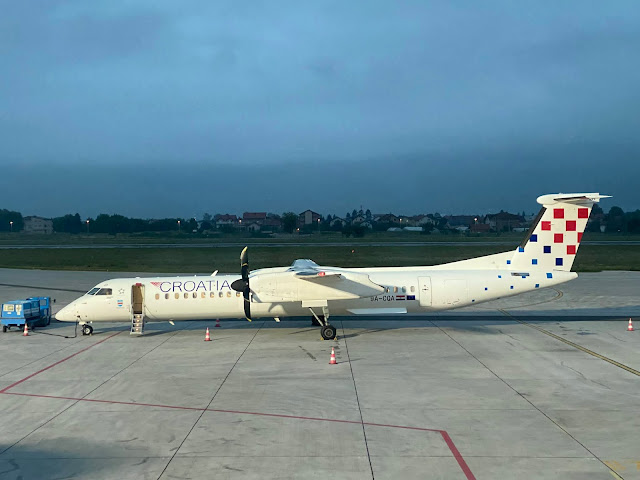 I was flying yesterday from Sarajevo to Istanbul via Zagreb. My first flight was on Croatia Airlines Dash 8-400 (reg. 9A-CQA), the second one on Turkish Airlines Airbus 321 (reg. TC-JTG). Early morning at  Sarajevo Airport was kind of busy with three flights leaving in one hour time: Wizz Air to Dortmund, Croatia Airlines to Zagreb and Austrian Airlines to Vienna. While I was waiting for my flight, I had a chance to talk to a agent who was working on Dortmund flight, she informed me that Wizz Air flight to Dortmund was almost full with only 5 empty seats. My flight to Zagreb was surprisingly empty!? I took this flight many times in the past and usually this flight was always full of transfer passengers to the USA and Canada. It looks like Turkish Airlines and Austrian Airlines are doing majority of transfer to North America now. Our Zagreb flight OU341 had only 17 passengers, only a small  bottle of water was served, which is okay for such a short flight (it took us 35 minutes from Sarajevo to reach our gate at Zagreb Airport). This was my first time visiting new Zagreb Airport terminal, compared to the old one is huge improvement. I was surprised how empty the whole airport was, barely any passengers! While I was waiting at the gate for my flight to Istanbul, next to us Ryanair was boarding the flight to Milan-Bergamo, I counted 95 passengers boarding that flight. Our flight to Istanbul was on Airbus 321 aircraft (TC-JTG) with 103 passengers. 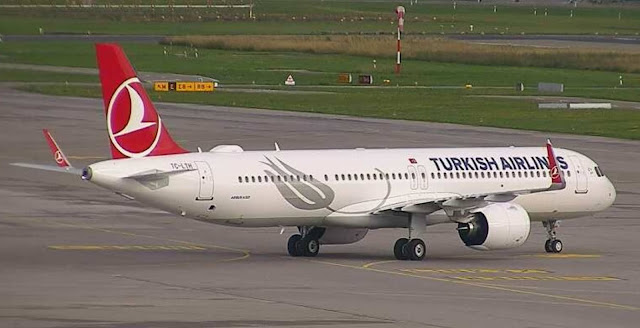 I was flying from the USA to Bosnia yesterday, Seattle (SEA) – Chicago (ORD) – Istanbul (IST) – Sarajevo (SJJ). I was surprised on how many people were flying from Chicago to Sarajevo via Istanbul. There were at least 60 passengers from Chicago, connecting on Turkish Airlines flight to Sarajevo. Istanbul new airport is excellent, very specious, and modern. My flight from Istanbul to Sarajevo was on Turkish Airlines brand new Airbus 321neo aircraft (TC-LTH). The flight was completely booked in economy class (162 seats), while business class had eight empty seats out of 20. Photos from the flight

During last month, Bosnian airports recorded 105.434 passengers, representing 53% of passengers traffic recorded in June of 2019, when 197.051 travelled through all four international airports in the country . Out of four international airports in Bosnia and Herzegovina, only Mostar Airport did not record any traffic. Eurowings was the only airline scheduling flights from Dusseldorf to Mostar, but due to low demand, has decided to cancel the flights, leaving Mostar Airport without any flights this summer season.

✈Bosnia and Herzegovina air traffic report for May 2021

Bosnia and Herzegovina air traffic report for May 2021, Sarajevo Airport including the data for the month of June 2021. 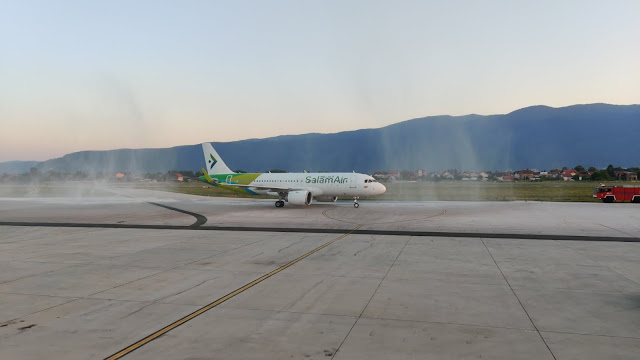 Salam Air, an airline from Oman, based at Muscat International Airport, has started regular scheduled flights to Sarajevo. The airline initially scheduled one weekly flight, but due to the high demand has increased it to twice a week. Flights will operate on Mondays and Fridays, with modern Airbus 320 neo airplanes. Through an innovative business model, Salam Air significantly expands Oman's connectivity, and for the first time enables a direct air link between Muscat and Sarajevo. 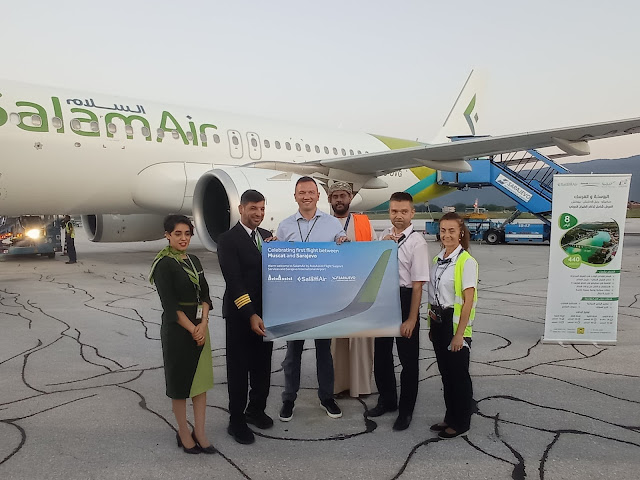 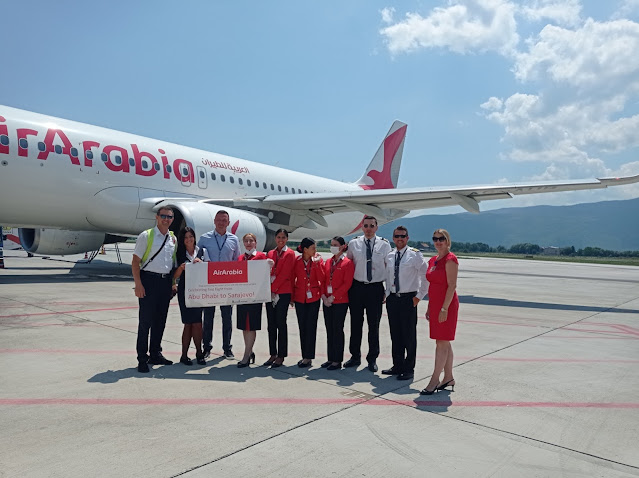 Today, Air Arabia Abu Dhabi inaugurated flights from Abu Dhabi to Sarajevo with an Airbus 320 aircraft. Flights are scheduled to operate three times a week on Mondays, Wednesdays and Saturdays until September 11, 2021. Abu Dhabi joins Sharjah as second destination for the airline to be served from Sarajevo Airport. 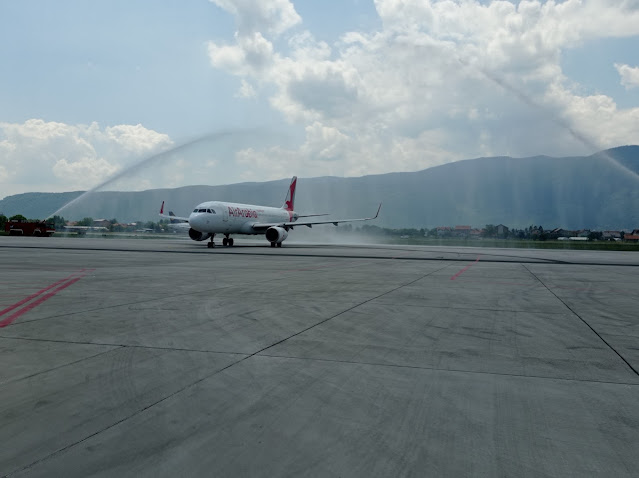 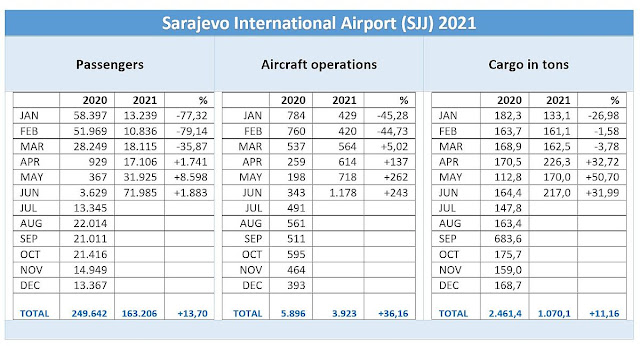 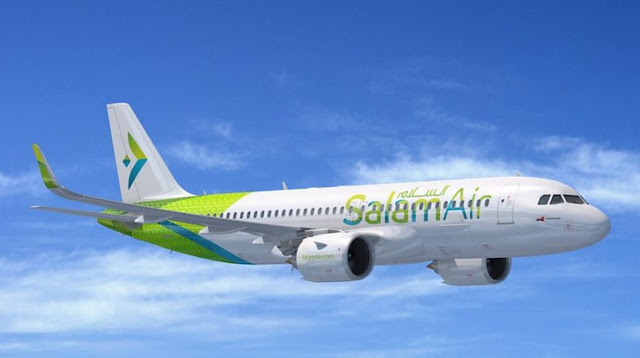 Omani low-cost carrier Salam Air will introduce one weekly service from Omani capital Muscat to Sarajevo starting July 12, flights will operate until September 13. Total of 10 round trip flights are scheduled, operating with Airbus 320neo aircraft offering 180 seats. Salam Air will offer a total of 3.600 seats in both directions.