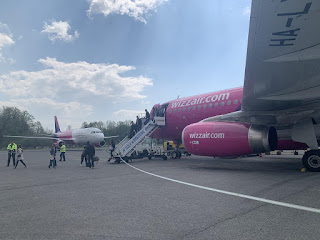 Wizz Air, one of Europe's fastest growing airlines, celebrates its fourth anniversary in Tuzla. Since the launch of Wizz Air flights from Tuzla in June 2015, the airline has transported more than 2 million passengers from and to Tuzla Airport.
Wizz Air was one of the first airline companies to conduct commercial international flights from Tuzla and today it remains the only permanent airline at this airport.
From the first flight in June 2015, Wizz Air has continued investing in the Tuzla County and currently operates 15 routes to 6 countries from Tuzla International Airport. 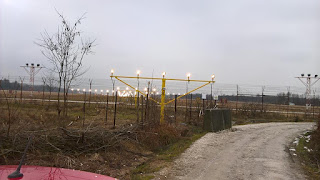 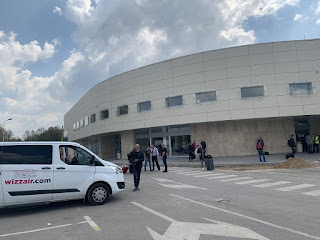 In March 2017, the fleet of Wizzair aircraft at its Tuzla base increased to 2 Airbus 320 aircraft. Last year Wizz Air has transported 584.589 passengers to and from Tuzla , representing an increase of 9% from the year before. Apart from providing direct flights from Bosnia and Herzegovina and the rest of Europe, Wizz Air has also stimulated the local labor market in aviation, tourism and other related industries. Wizz Air employs more than 70 crew members and pilots in Bosnia and Herzegovina. 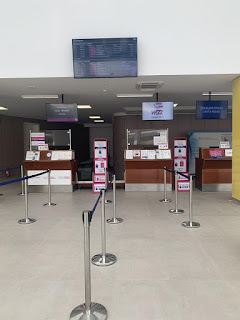 Paulina Gosk, corporate communications manager at Wizz Air, said they were delighted to celebrate four years of successful business together with Tuzla International Airport.
We are proud to be pioneers of affordable travel by air in the region and contributions we make  to the local economies with our low airfare prices. The WIZZ mission has always been to enable air travel to as many people as possible, and thus stimulate aviation and tourism in the communities we serve - Gosk said. 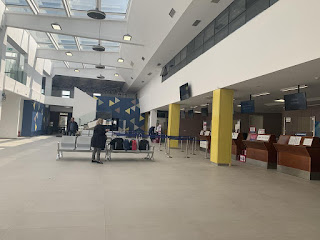 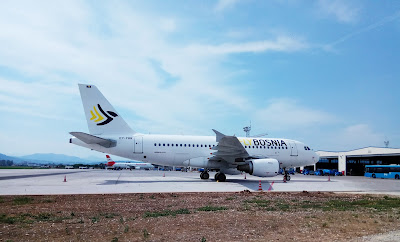 FlyBosnia A319 (E7-FBB) at Sarajevo Airport, photo by Kontrola letenja 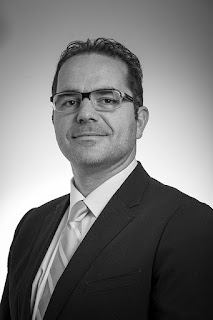 Investment Banker, 15 years of experience, with a strong finance, quantitative and communication skills in structuring hotel real estate projects on behalf of owners (Marriott, Four Seasons, Accor, and other luxury brands valued at $2 billion in aggregate). Specific experience includes optimizing master plans viability and profitability through financial engineering, strategic repositioning, structuring management agreements, structuring 3rd party operator contracts, project financing and asset management.
Career started in Washington DC, United States, in 1999 and since 2010 based in Sarajevo, Bosnia and Herzegovina. Mr. Bilabegovic was responsible in structuring first branded third party operating contracts in South East Europe, where Marriott hotels were opened in Sarajevo and now Accor Swissotel and Novotel are also in the works.  Mr. Bilalbegovic has a very strong hands on approach where its financial depth analysis is supported by extensive practical knowledge in doing what it takes to structure the deal in nascent emerging market. 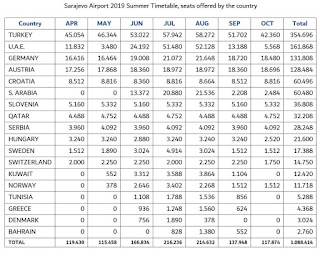 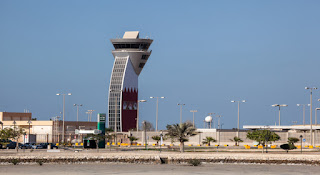 FlyBosnia opened bookings for Sarajevo-Bahrain Airport, flights. The flights will start on July 12th and operate once per week until September 13th. This is the first time Sarajevo and Bahrain will be connected with regular air service. Bahrain is Fly Bosnia’s fifth destination out of Sarajevo. During last two weeks FlyBosnia launched flights from Sarajevo to Riyadh, Gassim, Jeddah and Kuwait. The airline is planning European expansion during the month of August with flights to Paris, Rome and London. Ticket sales for European destinations should begin very soon.
Sarajevo-Bahrain flight schedule

Norwegian Air Shuttle has introduced flights between capital of Bosnia and Herzegovina and Gothenburg in Sweden. Flights now operate once a week, every Friday, until 09.08.2019. This is Norwegian’s fourth destination from Sarajevo, in addition to Stockholm, which can be flown throughout the year, the airline offers summer seasonal flights to Oslo in Norway and Copenhagen in Denmark.

Aegean Airlines, largest Greek airline and Star Alliance member, introduced new summer seasonal flights from Athens to Sarajevo. Two weekly flights now operate on Thursday and Saturday, from 13 June. until September 14, 2019. connecting two capitals for the first time. The flights offer possibility of connections across Greek islands. In addition to the domestic Greek connections, there is also the possibility of numerous connections for Cyprus and the Middle East and North African cities.
Aegean Airlines will use 78-seat DH4 aircraft, offering economy class configurations and full service during the flight, which includes free food and drinks.

The new line will surely contribute to the development of tourism and business connections between Greece and Bosnia and Herzegovina, as well as the continued growth of passenger traffic, which Sarajevo International Airport continuously records year after year.

Aegean Airlines, a member of Star Alliance, is the largest Greek airline offering flights to 151 destinations (31 domestic and 120 international) to 44 countries, with a fleet of 61 aircraft.
In 2018, the group recorded 14 million passengers on its flights. Thanks to the business approach in which the traveler has a central place, Aegean has so far won numerous awards for its services. In 2018, Aegean Airlines signed an agreement with Airbus to buy 42 new A320neo aircraft and plans an additional order.

FlyBosnia has launched its second destination in Saudi Arabia, Gassim Airport is served once per week, offering direct flights between two cities for the first time. Photos from inaugural flights (Photos by FlyBosnia Instagram and Twitter) 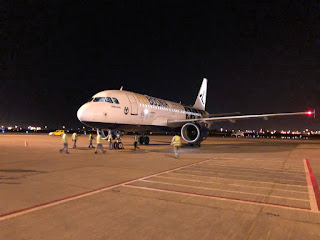 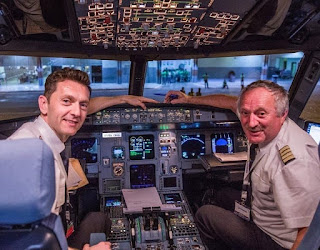 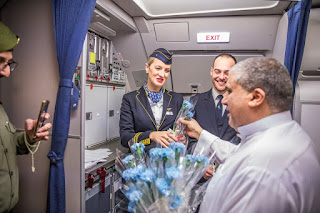 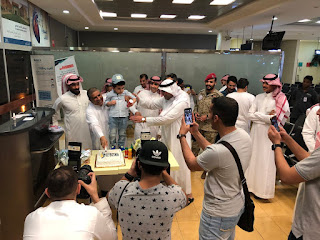 ✈EUROCONTROL is satisfied with performance of Bosnia and Herzegovina 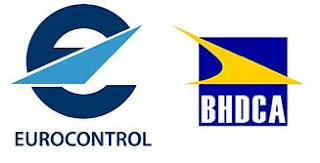 From January to April 2019 there were 101,868 flights in Bosnia and Herzegovina, an increase of 13.1% compared to the same period in2018, according to a letter that EUROCONTROL`s Director General Mr Eamon Brennan sent to the BHDCA`s Acting Director General Mr Željko Travar, in which he updated the news on the specific performance of Bosnia and Herzegovina in the European context for the first quarter of 2019.
Out of this number, the number of flights controlled by BHANSA was 11,344 ( 7,9% more than in the same period of 2018), the letter says.
During this period, Brennan said, there were no delays for BHANSA (compared to 32 minutes in the same period last year).
According to the latest EUROCONTROL`s forecast, air traffic growth in Bosnia and Herzegovina is 5,3% in 2019 and 4.6% in 2020.
“I would like to thank you and your staff for your continued support to our activities”, Mr Brennan said, emphasizing that Bosnia and Herzegovina was one of the first EUROCONTROLMember States to finalise its 2018 LSSIP reporting process.
“Congratulations on the Single Sky Award for the South East Common Sky lnitiative Free Route Airspace (SECSI FRA), which is an impressive project, really demonstrating how neighbours can work together to create cross-border free route airspace”, concluded Mr Brennan in a letter sent to Bosnia and Herzegovina Directorate for Civil Aviation.
Source: BHDCA
Posted by Flying Bosnian at 4:30:00 PM No comments:

✈Sarajevo Airport statistics for May 2019 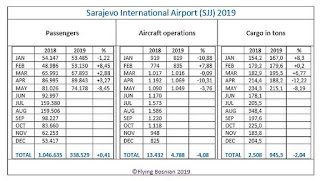 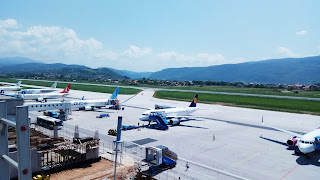 Eurowing has launched its third destination from Germany, Berlin (Tegel Airport) from today is connected with Sarajevo with two flights per week operating on Mondays and Fridays, increasing to three weekly on June 30. Third weekly flight will operate on Sundays. 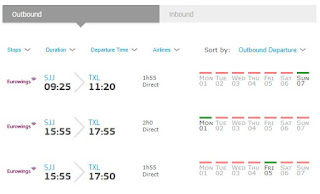 First Flynas flight from Riyadh  has landed at Sarajevo International Airport today. An Airbus 320-214 with registration VP-CXQ operated first flight, with flights time of 4h:45 minutes. The inaugural flight was completely sold out with 164 passengers on board. On arrival passengers were greater by Sarajevo Airport stuff and handed white roses as a welcome gesture to Bosnia and Herzegovina.

Arrival of Inaugural flight at Sarajevo Airport, photos by Klix.ba

✈Tuzla Airport statistics for May 2019 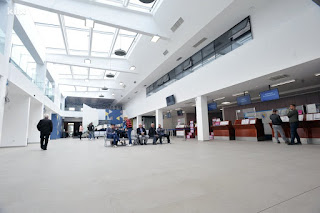 Tuzla Airport (inside of new terminal)
Tuzla Airport has recorded 6% passenger growth in May or an increase of 3.054 passengers compared to the same month of the last year. Year to date airport recorded 211.014 passengers, representing decrease of 5% or 10.646 passengers less. Next two months the airport should be able to add additional 10.000 passengers, recovering from the negative numbers from the beginning of the year. Second half of the year airport should record a growth of 5%, finishing the year with 600.000 passengers. 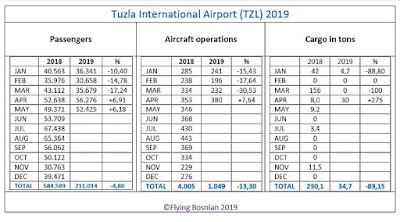