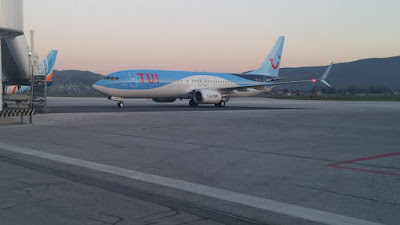 TUIfly Belgium, has established flights between Sarajevo and Brussels Charleroi airport. As of today flights will operate twice a week on Mondays and Fridays, with a mix of Boeing 737-800 and a Boeing 737-700 aircraft with 189 and 149 seats. 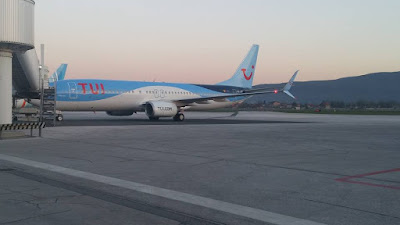 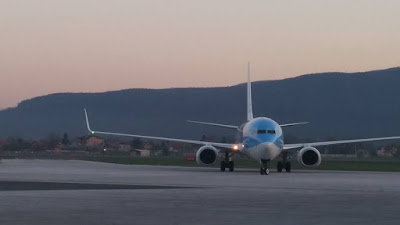 Information about fares can be obtained on TUIfly official website www.tuifly.com

Saudi Arabian airline Nesma Airlines in cooperation with All Shiddi Group has announced summer seasonal flights from Riyadh to Sarajevo from June 23.2017. to September 24.2017. Signing ceremony for Riyadh-Sarajevo flights was held at Saudi capital during the visit of Bosnian Minister of Foreign trade Mr. Mirko Sarovic, in presence of the Ambassador of Bosnia and Herzegovina to Saudi Arabia, Bosnia All Shiddi Group and Sheedi Tourism. Flights will start on June 23. 2017. operating daily with mix of Airbus 320/321 aircraft. Flights are scheduled to depart Riyadh at 13:35. Flights should be available for booking very soon on Nesma Airlines website and through Sheddi Tourism website and travel agencies. This is the third destination served from Sarajevo in Gulf region, after Dubai and Sharjah in the UAE. Fourth airline and destination in Gulf, Qatar Airways is set to launch flights from Doha to Sarajevo this year as well. Details on flights schedule will be posted in coming days. 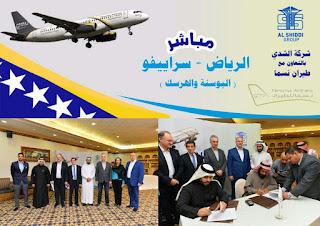 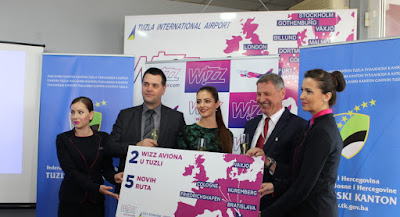 Tuzla, 27 March 2017: Wizz Air, the largest low-cost airline in Central and Eastern Europe, and Bosnia and Herzegovina’s largest airline, celebrated today the deployment of the second aircraft at Tuzla base.
The modern 180-seater Airbus A320 aircraft will support operations on five new routes commencing in March from Tuzla to: Friedrichshafen, Cologne, Nuremberg, Bratislava and Växjö. Passengers planning their holidays or weekend getaways to any of these popular destinations can book their tickets on wizzair.com from only BAM 29.99 *. 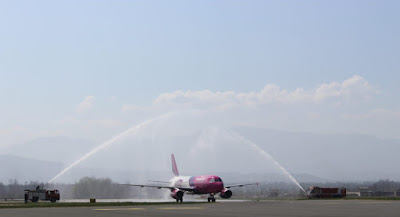 The new aircraft represents an investment of further $ 99 million** by WIZZ in Bosnia and Herzegovina, and will create 36 additional direct jobs with Wizz Air in Tuzla. The new routes, long-awaited by Tuzla travelers, to Cologne, Nuremberg and Växjö, each with two weekly services, and to Friedrichshafen and Bratislava, with three weekly services, are all commencing this month. Wizz Air currently offers 16 destinations to 7 countries and offers in total nearly 687,000 seats on sale on Tuzla routes in 2017, increasing its yearly total capacity with more than 90%.
In 2016, more than 310,000 passengers have enjoyed WIZZ’s low fares, easy booking system and excellent on-board service, to and from Tuzla, supporting over 230 local jobs*** in aviation and tourism industry. 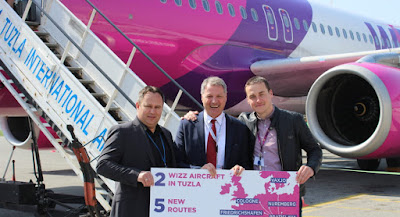 For 2017, 6 new routes to 4 countries have already been announced in Bosnia, along with adding Sarajevo as its second Bosnian airport and introducing the exciting low-fare connection to Budapest. The new aircraft allocated today, will allow Wizz Air to increase the number of weekly flights on the existing routes from Tuzla to Eindhoven, Gothenburg, Malmö and Frankfurt Hahn. 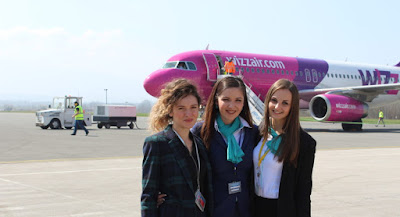 Already the largest airline in Bosnia and Herzegovina, Wizz Air is offering now 17 routes to 8 countries across Europe. Over the past four years, since WIZZ started to operate from Bosnia and Herzegovina, the airline has continuously invested in its ever-growing network, bringing more travel opportunities and providing the lowest fares possible for its customers. The first WIZZ flight took off from Tuzla to Malmö in 2013 and just after two years of successful operations, Wizz Air based one of its new Airbus A320 at Tuzla Airport.
WIZZ AIR’S NEW ROUTES FROM TUZLA 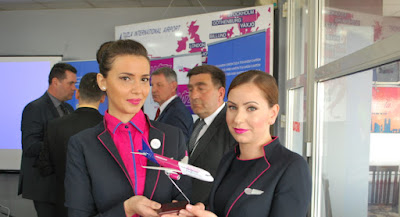 Speaking at a press conference in Tuzla, Sorina Ratz, Communications Manager at Wizz Air, said::”Today we are celebrating the arrival of the second WIZZ aircraft at Tuzla Airport and the launch of five long-awaited services to Friedrichshafen, Cologne, Nuremberg, Bratislava and Växjö, in March. As Bosnia and Herzegovina’s largest airline, we continue expanding our ever-growing network, bringing truly affordable opportunities for our passengers and creating more local jobs. WIZZ remains committed to the country and we look forward to continuing our fruitful partnership with Tuzla International Airport and to bringing more opportunities for our business and leisure travellers. Our local and dedicated crew is looking forward to welcoming on board all passengers planning to visit any of 16 popular destinations available on WIZZ’s low-fares from Tuzla!” 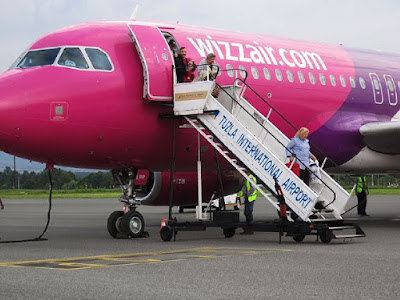 The Prime Minister of Tuzla Canton, Bego Gutić at today’s press conference, said: “On this occasion I want to thank the entire Wizz Air for the trust placed in us by bringing the another aircraft at Tuzla Airport and the opening of new routes from this airport. The citizens of Tuzla Canton, but also the whole country and the region can now travel from Tuzla Airport to 16 international destinations. The number of employees at the airportis constantly increasing as well as supporting activities in a number of industries are on the rise. I would like to point out to that the expansion of business cooperation led to our decision for increasing the capacity of the airport. The government has given its full support to the project of upgrade and reconstructionof the terminal building. On this occasion I want to congratulate to the management and employees of the Tuzla Airport for new business success and wish them that this pace continue in the same direction in the future. “
General Director of the Tuzla International Airport, Rifet Karasalihović said: “I must remember the moment when we were here 4 years ago in this same room welcoming the Wizz Air aircraft and start offirst operations to Malmo, Basel and Gothenburg, when the number of passengers was over 60,000 during 2013. Number of destinations and passengers carried in the years after 2013 were constantly growing, and we ended the year 2016 with a record number of over 311.000 passengers carried. Basing of the second Wizz Air aircraft at Tuzla airport is a very big challenge and we are planning to achieve in 2017 a number of about 480,000 passengers carried over Tuzla Airport. I also want to note that airport in cooperation with the Government of Tuzla Canton led by Prime Minister Gutić will provide funds to finance the project of upgrade and reconstruction of the terminal building with a capacity of 700,000 passengers per year, which should meet the needs of the airport for a longer period. I hope that we will continue a successful cooperation with the Wizz Airairline in the future. “
About Wizz Air
Wizz Air is the largest low-cost airline in Central and Eastern Europe, operates a fleet of 79 Airbus A320 and Airbus A321 aircraft, and offers more than 500 routes from 28 bases, connecting 138 destinations across 40 countries. At Wizz Air, a team of approximately 3,000 aviation professionals delivers superior service and very low ticket prices making Wizz Air the preferred choice of 23 million passengers in 2016. Wizz Air is listed on the London Stock Exchange under the ticker WIZZ and is included in the FTSE 250 and FTSE All-Share Indices. Wizz Air is registered under the International Air Transport Association (IATA), Operational Safety Audit (IOSA), the global benchmark in airline safety recognition. The company was recently named 2016 Value Airline of the Year by the editors of Air Transport World, one of the leading airline trade magazines, as well as 2016 Low Cost Airline of the Year by the Center for Aviation (CAPA), a leading provider of independent aviation market intelligence.
* One way including all taxes and non-optional charges
**http://www.airbus.com/newsevents/news-events-single/detail/2017-price-adjustment-for-airbus-modern-fuel-efficient-aircraft/
*** ACI suggests creation of 750 on-site jobs for every 1 million carried passengers per year
For more information:
Sorina Ratz; Wizz Air Group; communications@wizzair.com
Follow us on Twitter: @wizzair
Notes for Editors:
Source: Tuzla International Airport
Posted by Flying Bosnian at 6:57:00 PM No comments:

Wizz Air introduced flights from Tuzla to London Luton Airport on October 30.2016. The airline started with two weekly flights until January 3rd when flights were reduced to one weekly. Beginning next week Wizz Air will reintroduce second weekly flight. 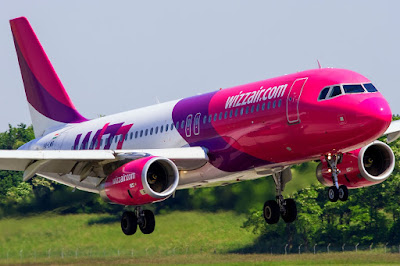 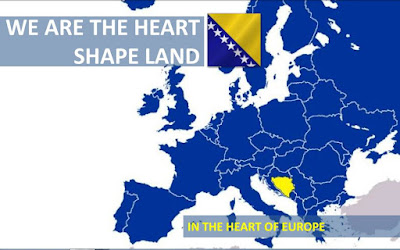 Bosnia and Herzegovina’s four international airports recorded 1.225.676 passengers, representing an increase of 8,50% or 95.927 passengers more than a year before.

Air cargo transport has recorded the best year so far. In the year 2016 total of 8.540 tons of cargo have been transported to and from airports in Bosnia and Herzegovina.
In 2016, airports in Bosnia and Herzegovina processed a total of 394 tons of mail, of which 75 tons were loaded and 319 tons were unloaded. All registered mail traffic in 2016 was handled through Sarajevo International Airport.