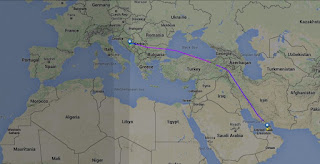 Air Arabia first scheduled flight (G9311) to Sarajevo International Airport from Sharjah International Airport has landed today at Sarajevo Airport at 12:47 after 5 hours and 10 minutes of flying time, covering distance of 3.934 kilometers. Flight was operated with brand new Airbus A320 aircraft registration A6-AOL with 168 seats. Aircraft with the serial number 6942, took off to the skies for the first time on January 22. 2016. 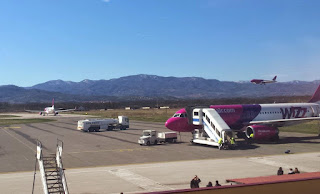 During month of February number of passengers using airports in Bosnia and Herzegovina has increased from 53.303 to 63.405 (+18,95% or 10.102 passengers increase). Tuzla International Airport recorded largest increase in passengers handled +65,40% or 7.884 passengers increase. Sarajevo International Airport recorded increase of 6,66% or 2.659 passengers increase, comparing to same month last year. Banja Luka and Mostar airport recorded decrees in all areas (flights, passengers and cargo). The only source of income for Banja Luka airport during 2015 were cargo flights to Turkey. Scheduled Air Serbia flights are subsidized by local government (Air Serbia does not pay landing and handling fees to the airport). Unfortunately for Banja Luka airport MNG Airlines cargo flights to Istanbul have stopped. Most likely flights will reopen in the near future but from Tuzla International Airport instead. It’s not clear yet if flights will be operated by MNG Airlines or Turkish Airlines.
Read more »
Posted by Flying Bosnian at 9:54:00 PM No comments: 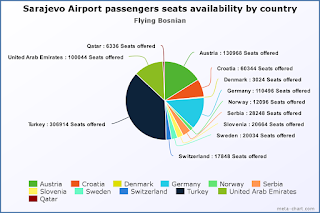 From April to October Sarajevo Int. Airport will see increase in flights on current and new destinations. Largest increase of flights is to United Arab Emirates which will position its self as fourth country in term of seats offered from Sarajevo. From April to October total number of seats offered from and to Sarajevo will reach record high of 817.016 seats. During summer timetable flights to and from Sarajevo record on average 85% cabin load factor. Charter flights are not included in the study except flights to Antalya, Turkey. With presented timetable we can expect  record high number of passengers this year.

My prediction for upcoming months: 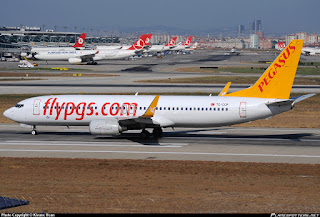 Number of flights by the airline and the day of the week
* Second daily Pegasus Airlines flight from July 01/2016.
Posted by Flying Bosnian at 5:10:00 AM No comments:

✈Air passenger transport between airports in Bosnia and Herzegovina and Sweden for year 2015. 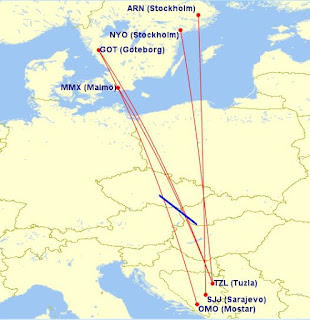 Table below is showing traffic between airports in Bosnia and Herzegovina and Sweden on quarterly base. Data is missing for flights from Tuzla to Stockholm Skavsta (NYO) airport. Flights on this route have started on June 26. 2015. with two weekly flights on board of Wizzair Airbus 320 offering 180 seats. As of November 2015 flight operate only once per week. Based on the Wizzair schedule estimated 7.500 passengers used the route, which is bringing total passengers between two countries to 107.856.