Sarajevo International Airport has terminated its contract with Fly Bosnia after the airline failed to pay its debts.

This information was confirmed to Bosnian news portal Klix by Sarajevo airport, stating that the suspension of Fly Bosnia has started on September 18th of this year.

"Considering that the airline did not settle its debts within the given period of 60 days, nor did it accept the proposal on the manner of debt repayment, the contract on providing services for receiving and dispatching aircraft, passengers and luggage between  Sarajevo International Airport and FlyBosnia was terminated on November 17. 2020.” Sarajevo airport said.

In addition, Sarajevo Airport added that all necessary legal actions will be taken.

"In connection with the goal of protecting its financial interests, a request for activation (collection of a bank guarantee), was submitted today (November 18)," Sarajevo airport added.

In December of last year, Fly Bosnia confirmed to Klix portal that they had agreed to repay the debt to Sarajevo Airport, but also did not want to state how it would be done and what the amount was.

Sarajevo airport confirmed  that the debt was not paid despite the mentioned agreement. 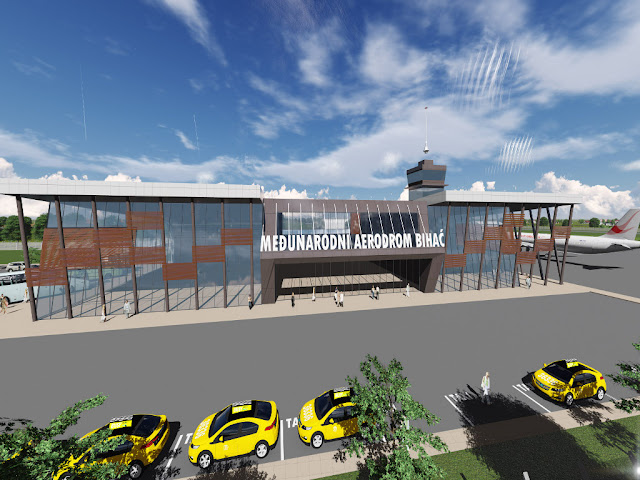 Bihac Airport submitted the Request for the Urban Planning to the Federal Ministry of Planning and Construction. At the beginning of 2021 Bihac Airport is hoping to get all necessary water and waterways protection permits, and finally by the end of 2021 hoping  to take a historic step by applying for building permit. 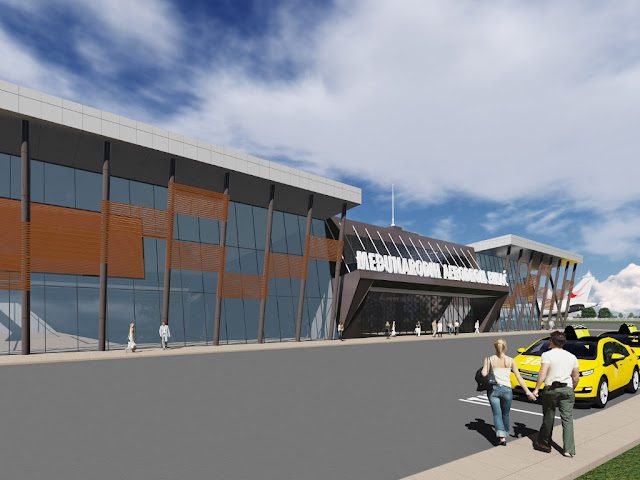 In addition, the airport is  expecting that through the Law on Public-Private Partnership, it will be competitive with potential investors with whom they have already passed a certain number of steps, believing that Bihac Airport will achieve cooperation through the "build-operate-transfer" model. 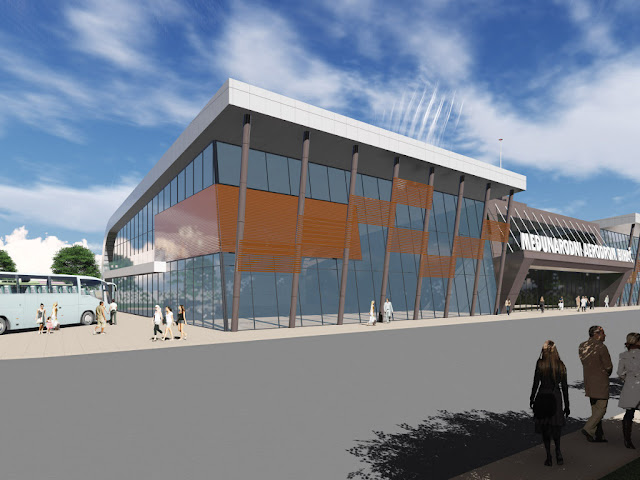 The airport emphasizes that the funds for the previous activities were provided by the Federal Ministry of Transport and Communications, with promises that Bosnia and Herzegovina federal government will continue to finance the improvement and construction of the project, because the Airport in Bihac is the obligation of the Government of the Federation of Bosnia and Herzegovina. 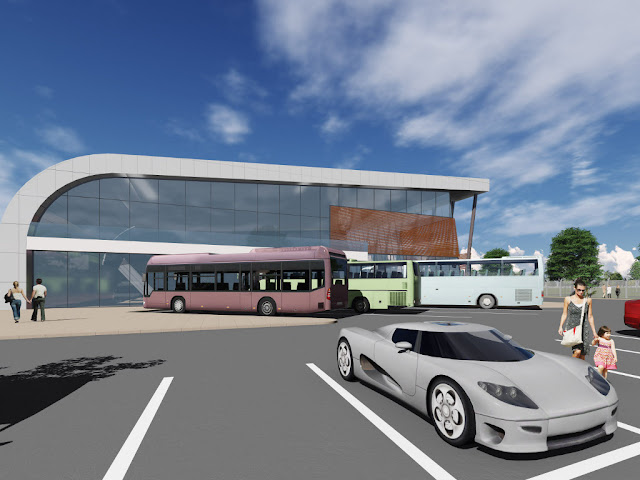 So far, the expropriation of land for the needs of the construction of the airport has been carried out according to the agreement from March 19. 2019, in the total amount of 6,612,100 Bosnian Marks. 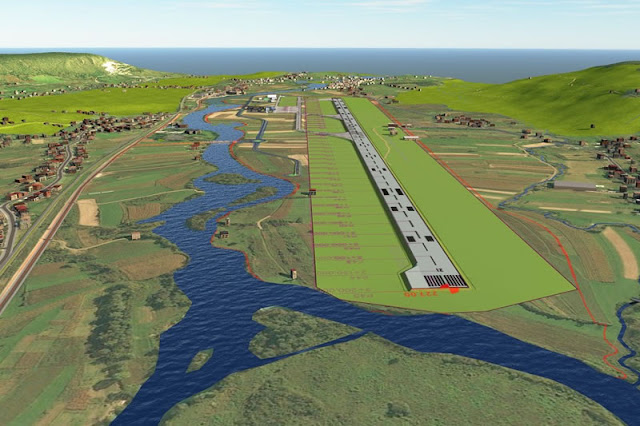 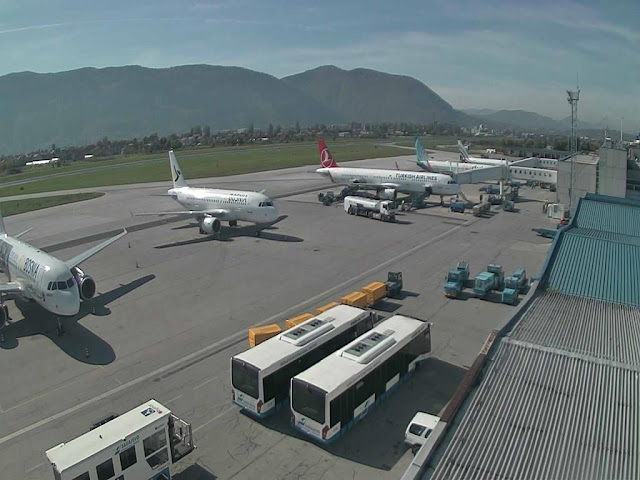 Sarajevo International Airport has posted statistic data for October, reflecting large decreases in all areas of operations due to global coronavirus pandemic. During the month of October a total of 21.416 passengers traveled through Sarajevo Airport, representing a decrease of 77% or 74.212 passengers less when compared to the same month of the last year. Number of operated flights decreased  by 45% or 502 flights less, while transported cargo recorded decrease of 20%. 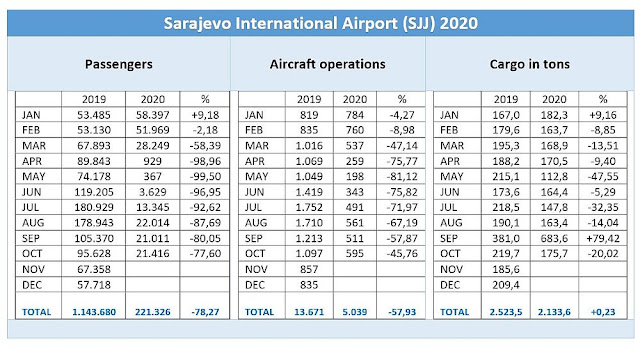 ✈ European aviation during and after COVID-19 crisis ! 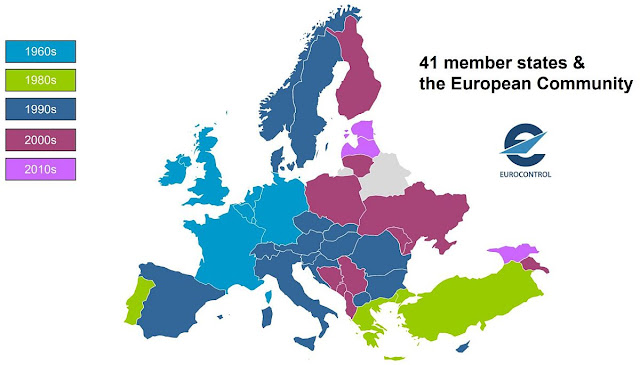 European aviation is feeling the burden of the COVID-19 crisis even more heavily than other world regions. Its year-to-date cumulative seat capacity is down by 55% – worse than in any other region.

Moreover, according to IATA, its airlines generated negative free cash flow at -83% of revenue in 2Q2020, versus an average of -52% for all regions. Preliminary 3Q2020 results from the leading European airline groups, Lufthansa, IAG and easyJet, indicate that they have continued to burn through cash at a rapid rate. 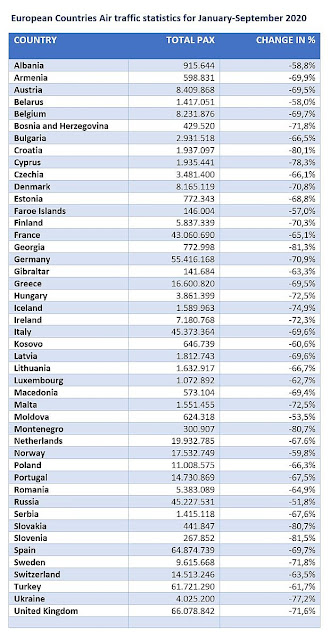 Globally, airlines are expected to continue to burn cash until at least the end of next year, but Europe's airlines may struggle for cash break-even for longer than that.It is a sure sign that things are desperate when Europe's airlines, pilot unions and airports all agree. Jonathan Hinkles, CEO of the UK regional airline Loganair argues that without testing at airports, UK aviation is "whirling around like a leaf in an autumn storm".

✈EasyJet CEO Johan Lundgren says "Aviation continues to face the most severe threat in its history".

✈Virgin Atlantic CEO Shai Weiss warns that "without mass testing", the UK's economic recovery "will not take off".

The European aviation industry urgently needs standardized, consistent COVID-19 testing to replace the web of quarantine restrictions that are choking it. After nine successive weeks of progressively worse year-on-year declines, Europe now has the deepest capacity cut of all the world regions.

Ryanair, Europe's biggest airline, has cut its winter capacity plan from 60% to 40% of 2019 levels. EUROCONTROL DG Eamonn Brennan told CAPA Live October that he expected air traffic movements in Europe at 40% of last year's this winter, which suggests a lower figure for seat capacity (since long haul flights, with more seats, have been cut more heavily than short haul).

The EU's 'traffic light' approach to travel restrictions does not seem likely to alleviate the outlook to any meaningful degree. With Europe's aircraft perhaps only half full on average, passenger numbers could fall short of 25% of prior year traffic, pushing revenue even lower.

From pandemic towards recovery – tracking the evolution of European aviation during the pandemic.

We can expect European airline bankruptcies by the end of this winter. 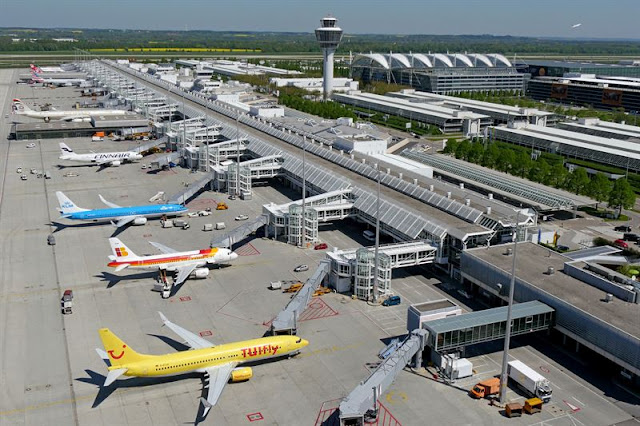 The ANKER (Airline Network Knowledge Expertise & Research)
The report for European Airport Traffic Statistics for January-September 2020 is showing huge decline in passengers numbers compared to the same period of last year due to coronavirus pandemic. The report is showing passenger numbers by majority of European airports by each European country.
-
Source and Copyrights Ⓒ 2020 The ANKER Report and flyingBosnian (www.anker-report.com)
Posted by Flying Bosnian at 10:48:00 AM No comments: