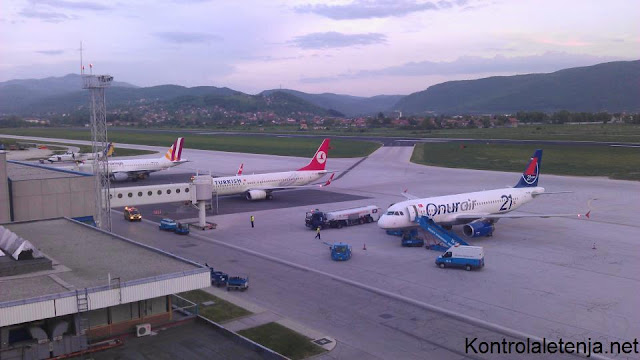 The government of the Federation of Bosnia and Herzegovina held a session on October 22, 2020 and passed a decision on suspending fees for the development of air traffic until 31.12.2021.

The abolition of this fee should result in a reduction of airline ticket prices to the satisfaction of all passengers, as well as airlines operating from Sarajevo International Airport.

The fee of 10 euros per departing passenger from Sarajevo Airport was used mainly for the reconstruction and development of two other airports in the Federation of Bosnia and Herzegovina (Mostar and Tuzla International Airports). Last year, Sarajevo Airport collected €5.763.380 or 11.272.191 Bosnian Marks in the above-mentioned tax.

It is very ironic that the main airport in the country is collecting this tax just to support Mostar Airport, which is partially owned by a foreign company – in this case, Zagreb Airport. This is consistent with Tuzla Airport, which supports foreign airline, Wizz Air, with huge discounts for airport operations with the funds collected at Sarajevo Airport. 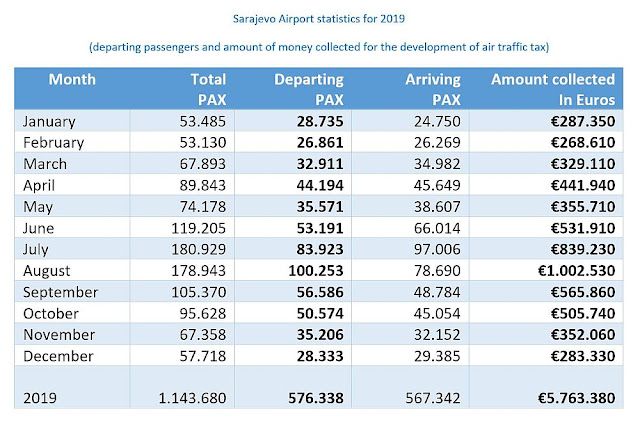 If Sarajevo Airport would like to see a recovery from the devastating Covid-19 pandemic, its owner (the Government of Federation of Bosnia and Herzegovina) should invest this tax to bring new airlines that would attract mass tourism to the city and the whole country, or abolish the tax altogether in favor of bringing low cost airlines to Sarajevo. 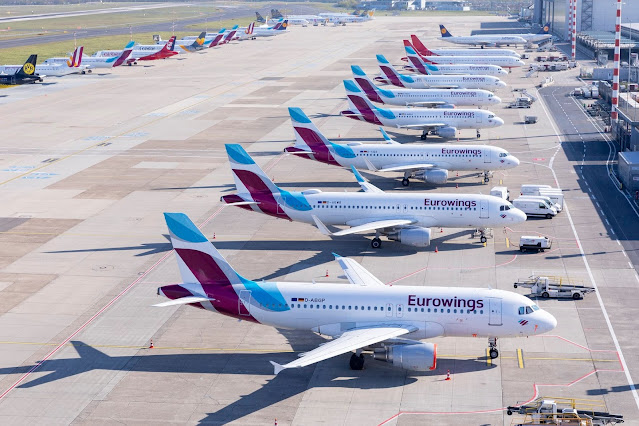 Eurowings has pushed back Sarajevo flights relaunch for December 19th. The airliner was selling tickets for flights beginning next week but due to Coronavirus cases rising in both Germany and Bosnia and even tighter traveling restrictions the airline decided to postpone Sarajevo flights resumption just before Christmas holidays. Both Cologne and Stuttgart will be resumed on December 19th with two weekly flights for both destinations.

➤Cologne-Sarajevo flights will operate on Tuesdays and Saturdays (for Christmas-New Years holidays additional flight will be operated on Thursdays on following dates: 12/24, 12/31 and 01/07)

➤Stuttgart-Sarajevo flights will operate on Tuesdays and Saturdays.

NOTE: Changes to schedules are likely possible due to unpredictable pandemic situation! 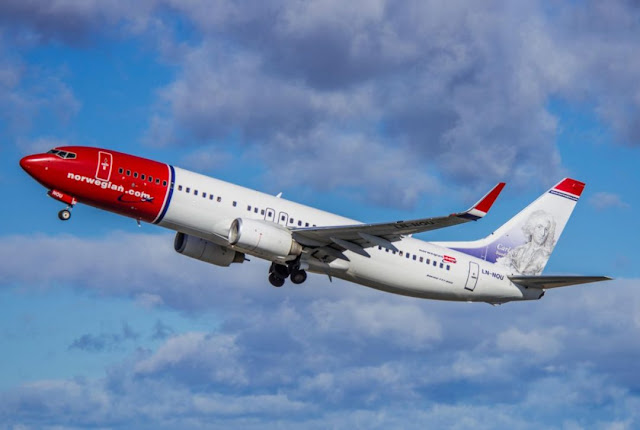 Norwegian Air is resuming flights from Stockholm Arlanda Airport to Sarajevo on December 19. 2020. after 9 months break due to the Coronavirus pandemic.

During the summer of 2019 Norwegian Air operated flights from Stockholm, Oslo, Copenhagen and Gothenburg to Sarajevo. The airline plans to resume summer seasonal flights from all four Scandinavian destinations if the coronavirus pandemic is under control without border closures and entry restrictions.

➤With the beginning of Winter timetable on Sunday October 25, Banja Luka Airport will see major flight reductions when compared to the same time of the last year. Air Serbia will operate two weekly flights from Belgrade while Ryanair will scale back its operations to Banja Luka from last year’s 5 destinations to only one this coming winter season.

➤Ryanair will delay the launch of new flights from Vienna to Banja Luka until March 29, while its planned new route from Milan-Bergamo has been cancelled altogether.

➤Ryanair is pushing back the resumption of most of its flights to Banja Luka until spring of 2021.

➤Following routes are suspended until Summer timetable 2021. (changes to the schedules are likely possible due to uncertainty with coronavirus pandemic and borders opening and closing on short notice). 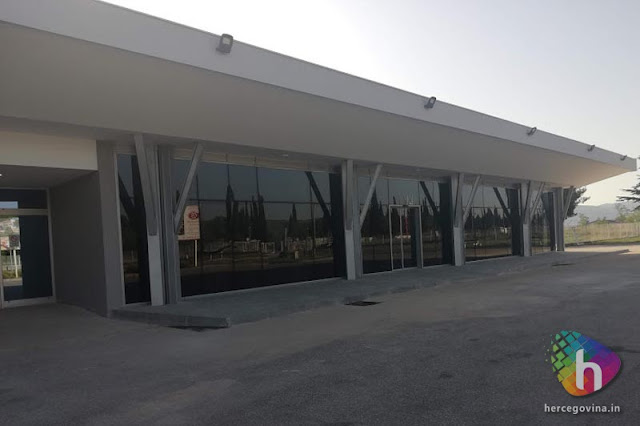 During Winter timetable 2020-21 Mostar Airport will not see any scheduled or charter flights. Last winter season, only airline operating regular flights to/from Mostar was Croatia Airlines with two weekly flights from Zagreb. Croatia Airlines flights were heavily subsidized by the Government of Federation of Bosnia and Herzegovina and Hercegovina-Neretva County.

Due to the Coronavirus pandemic all flights to/from Mostar were suspended in March of this year without any indication of flights being reintroduced again.

In December of last year FlyBosnia introduced one weekly Mostar-Rome flights, but due to pandemic those flights were short lived.

Without any air traffic Mostar Airport is solely depending on the government handouts for its survival. With Bosnia and Herzegovina air traffic down 72% compared to the last year only viable option for Mostar Airport is to be completely closed until March of next year, possible longer if airport’s management is not able to secure any flights.

Wizz Air in the last few weeks continue to adjust planned operation, due to  various travel restrictions and market demand. As of 19-OCT-20, the airline’s planned  Tuzla operations for the month of November 2020 (01NOV20 – 30NOV20) as follows: 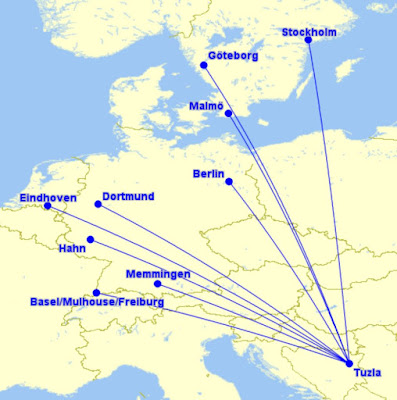 Tuzla International Airport will see drastic flights schedule reduction during winter months. Wizz Air is still the only airline operating at the airport with two Airbus 320 aircraft based at the airport.

The airline has announced yesterday additional flight cuts to its schedule from Tuzla. During winter timetable Wizz Air will operate to following destinations:

Following destinations are scheduled to restart at the beginning of summer timetable in March of next year: Berlin (flights will operate once per week until 12.04.2020), Billund, Cologne, Friedrichshafen, Karlsruhe/Baden-Baden, Salzburg, Vaxjo and Vienna. 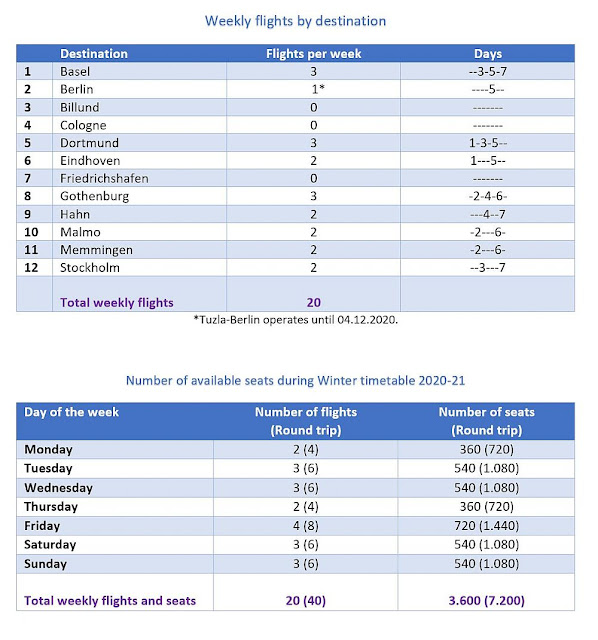 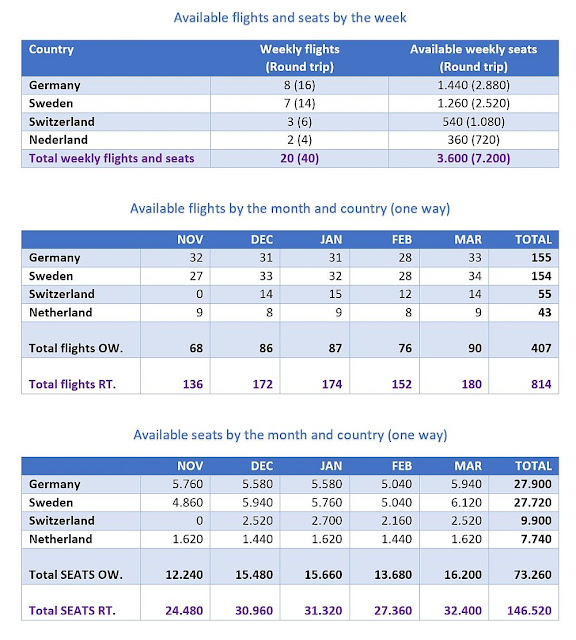 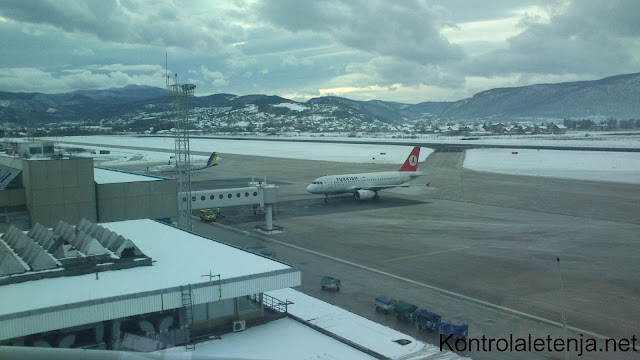 The 2020/21 winter timetable enters into force on Sunday, October 25th. 2020. until March 27th of 2021. This winter season will be like no other due to ongoing coronavirus pandemic. Majority of the world airlines are in survival mode operating at 20-30% capacity. 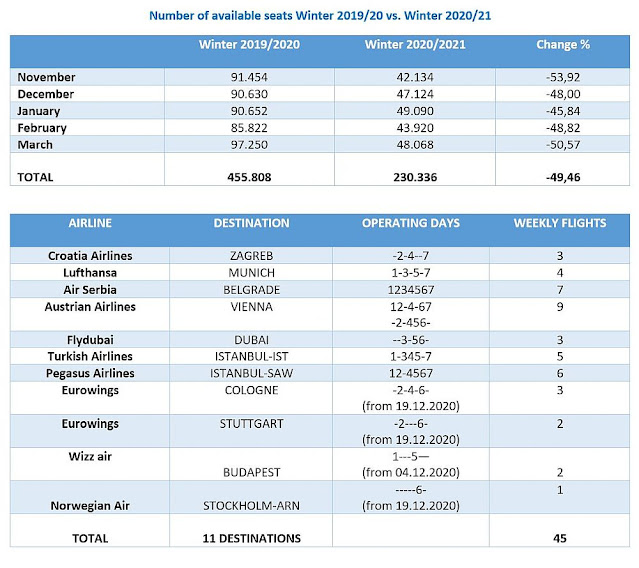 Sarajevo Airport has been hit extremely hard with flight cancelations and airlines temporary withdrawal from the airport due to border closures and ever-changing entry rules. Passengers traffic is expected to plummet even deeper during upcoming winter months. Last winter season passengers were able to fly to 14 destinations in 11 countries in Europe and Gulf region with 81 weekly departures. 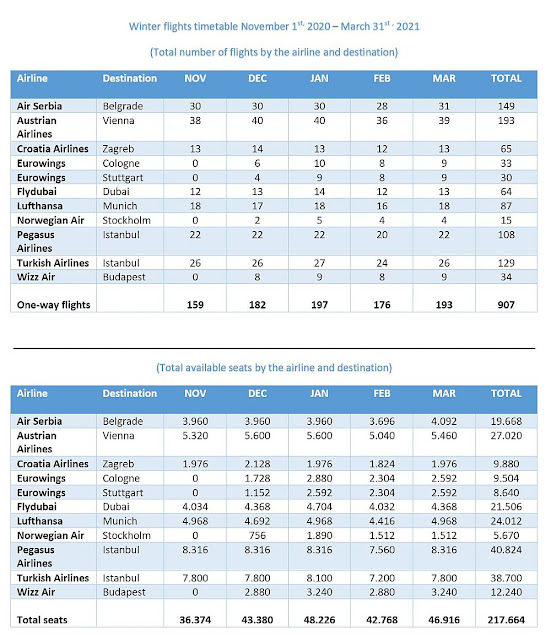 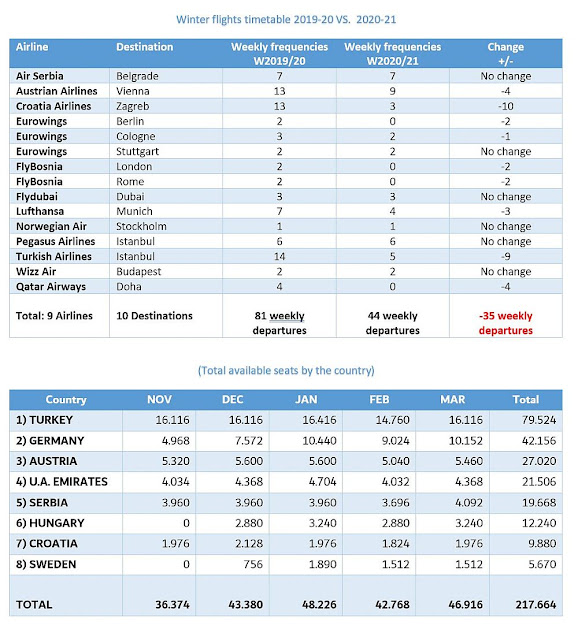 ✈ Sarajevo Airport Incentive for airlines to open base!

Sarajevo International Airport is offering incentive for all airlines interested in opening base at the airport:

I Subject of the Public Notice

Subject of the Public Notice is the opening of the airline base at Sarajevo International Airport. The base implies a place set by airline carriers, where a member of crew personnel starts and ends time of duty or duty periods and where, under normal circumstances, an operator is not under obligation to provide an accommodation for a member of crew personnel. In the first stage, the base is set up for two aircraft, with the option of increasing number of aircraft, as available capacities increase at Sarajevo International Airport or when other conditions are fulfilled.

All airline companies which plan to introduce scheduled route/s at Sarajevo International Airport are entitled to submit a request for the base.

III Time Period for the Airline Base

It is mandatory to comply with the airport operating hours, the same for Winter as well as for Summer flight schedule.

-Those air carriers which plan to carry out the largest number of air operations per week/month, i.e. per year, shall have a priority.

-Those air carriers which plan to increase a number of air operations in 2022 and 2023, shall have a priority.

2. Number of Passengers per Year in Accordance with a Chart Below 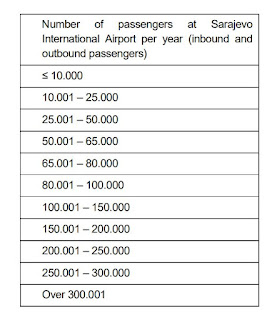 Also, taking into consideration that the discount is approved in advance, after the end of a calendar year, the Company shall revise accomplished quantitative indicators (total number of passengers/total number of outbound passengers) for the airline companies which have a discount in accordance with the item 18.4 of the Charge List, and corrections shall be done immediately, if necessary.

4. Number and Aircraft Types Which are to Be Used by the Air Carrier for Air Operations (Aircraft Characteristics, Aircraft Wingspan, MTOW)

Those airline companies which plan to operate with aircraft types which have the capacity of 150 passengers or more shall have a priority, whereat satisfying environment protection and noise protection requirements in compliance with legal regulations, runway weight bearing capacity, Sarajevo airport technical characteristics etc.

VI Deadline for Submission of Proposals