✈FlyBosnia returns Airbus319 to the lessor 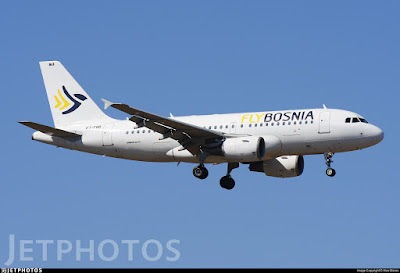 FlyBosnia has returned one of its two aircraft to the owner toady. Airbus 319 with registration E7-FBB took of from Sarajevo Airport yesterday with following routing on the way to Phoenix Goodyear Airport  in the United States. 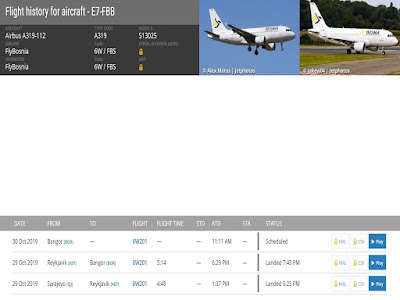 This same aircraft flew from Phoenix Goodyear Airport  toSarajevo on May 07. 2019.  and was put in service at the end of June, just to be returned to the owner after 4 months being in service. FlyBosnia has only one aircraft in its fleet,  an Airbus 319 registration E7-FBA. 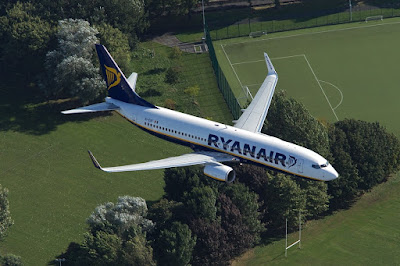 Ryanair opened reservations for its sixth route from Banja Luka,  Frankfurt Hahan Airport (HHN), will be served with two weekly flights on Mondays and Fridays starting February 03. 2020. Flights are already on sale at Ryanair.com 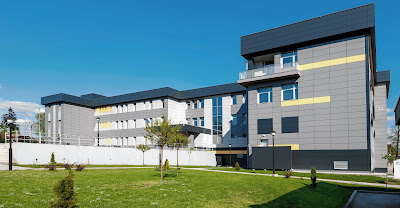 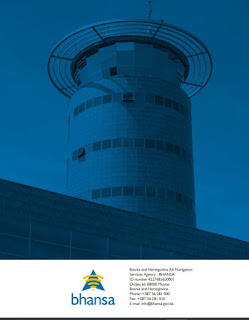 On 01/01/2014 the staff transition process from the BHDCA and entity directorates was completed and BHANSA started operating airport access and air traffic control at the international airports of Sarajevo, Mostar, Banja Luka and Tuzla. 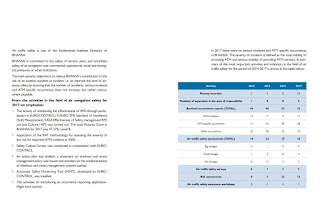 BHANSA's mission is to secure safe, efficient and fast air traffic flow in all phases of flight, by managing air traffic and providing services adapted to the requirements of airspace users. 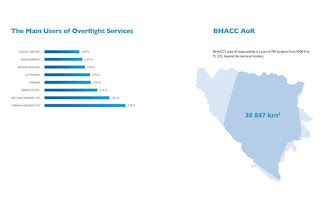 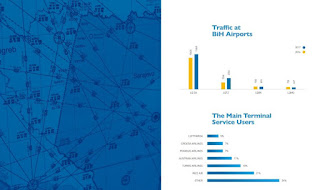 Source:BHANSA
Posted by Flying Bosnian at 8:00:00 AM No comments: 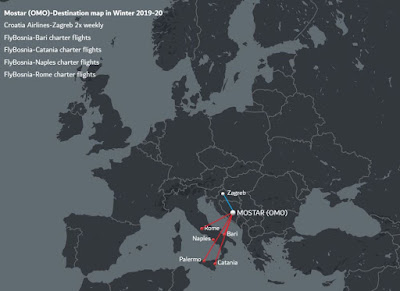 During Winter timetable Mostar Airport won’t see any major changes to its schedule. Only airline operating to/from Mostar during winter months is Croatia Airlines with two weekly flights from Zagreb. Croatia Airlines flights are subsidized by the Government of Federation of Bosnia and Herzegovina and Hercegovina-Neretva County. 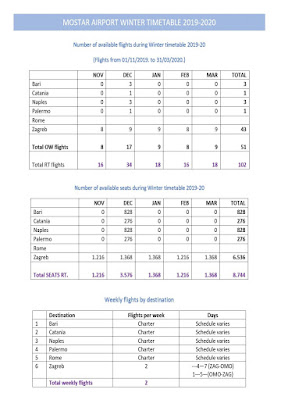 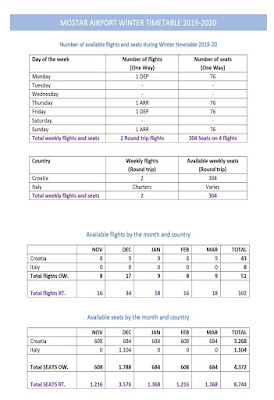 During the summer, Bosnian media was reporting that Mostar Airport was holding talks with Ryanair about possible launch of flights to Mostar from Germany, Sweden and Poland. So far for the summer schedule of 2020 Eurowings has confirmed return of its seasonal service from Duesseldorf and Stuttgart. According to Mostar Airport Eurowings had very successful 2019 summer season by operating majority of its flights with 180 seats Airbus 320 aircraft, compared to year before when flights were not so popular due to operational aircraft being Dash 8-400 with 76 seats. Eurowings flights from/to Germany to Mostar are subsidezed by the Government as is the case with Croatia Airlines. 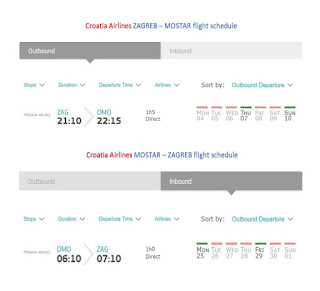 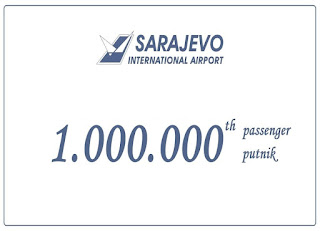 Today, October 25. 2019, Sarajevo International Airport handled its millionth passenger of the year.  The one-millionth passenger is handled 40 days ahead of the last year.
Year to date Sarajevo Airport handled 1.000.000 passengers, representing an increase of 8%, or  78.000 passengers more, compared to same time of the last year. Sarajevo Airport is anticipating on welcoming 1.125.000  passengers this year.
Source: Flying Bosnian and SIA
Posted by Flying Bosnian at 4:47:00 PM No comments: 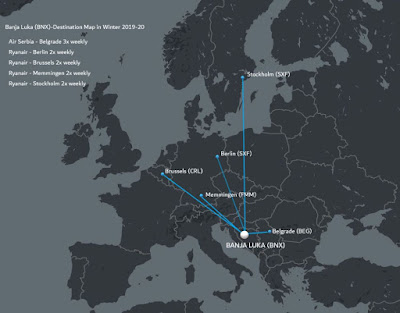 Note: Stockholm Skavsta Airport code is NYO
With the beginning of Winter timetable on Sunday October 27,  Banja Luka Airport will see flight increases from Belgrade by one weekly flight for a total of 3 weekly, operated by Air Serbia using ATR-72 aircraft offering 66 seats each way. Compared to the last winter Banja Luka will be connected with two weekly flights to Berlin by Ryanair. 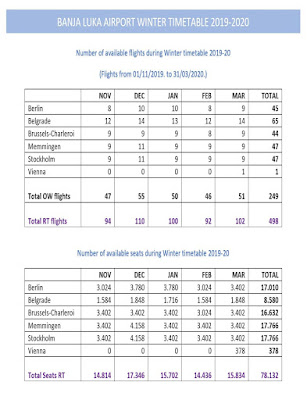 Ryanair will also increase flights from both Memmingen and Stockholm to 3 weekly during Christmas and New Year’s holidays. From March 30. 2020, Banja Luka will be connected with two weekly flights to Vienna by Ryanair. 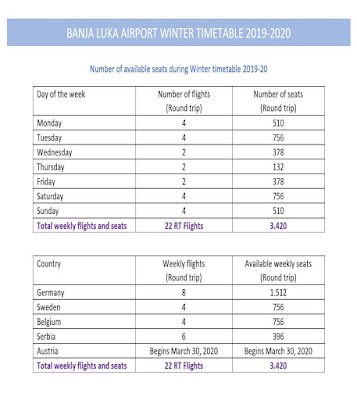 With introductions of new flights by Ryanair and more flights by Air Serbia, Banja Luka airport is finally on the way to reach sustainability after many years of stagnations. In the near future we can see Ryanair opening a base at the airport and stationing one to two aircraft and open new routes to Germany, Greece and France. 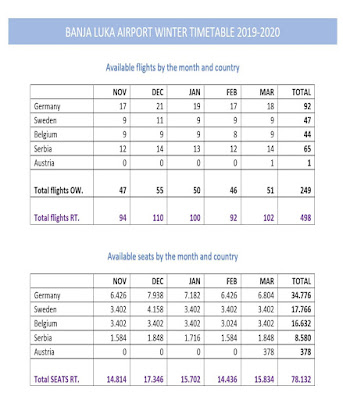 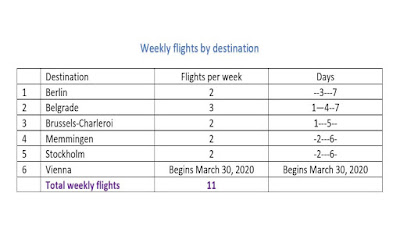 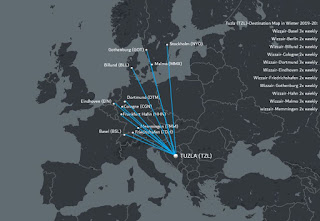 Winter timetable for Tuzla Airport won’t bring any major changes when compared to the same time last year. Wizz Air is still only airline operating at the airport. 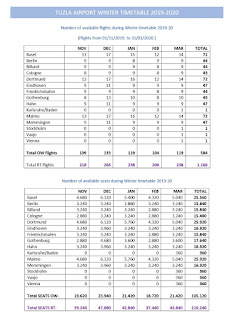 With the beginning of winter timetable Wizzair is discontinuing its two weekly Vienna flights, but same time is extending Billund to year-round operations. All other flights will remain the same as last winter season. 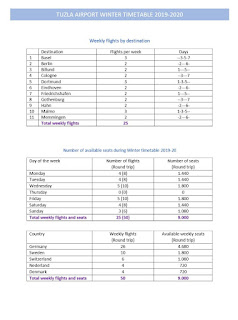 Due to very incompetent people leading the airport, major airport projects are still not completed and are overdue by one year and longer. Terminal building is still not finished and for the airport that handles around half a million passengers a year its almost impossible to imagine that airport still doesn’t have luggage belts (instead, luggage is still carried manually from the airplanes to the customers at arriving hall)!? 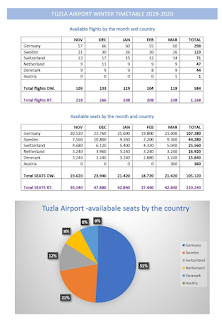 The other major issue is constant delayed installation of landing lights (the airport director Rifat Karahasanovic is well know in Bosnian media for giving staged interviews presenting him self as a “big boss” and constantly giving false information about the airports future and ongoing projects). Transparency and responsibility are strange subjects for majority of Bosnian public companies and employees including the Governments on all levels  when only qualification for the job is being loyal to the ruling party where corruption and nepotism is a norm.
Source: Flying Bosnian
Posted by Flying Bosnian at 5:13:00 PM No comments: 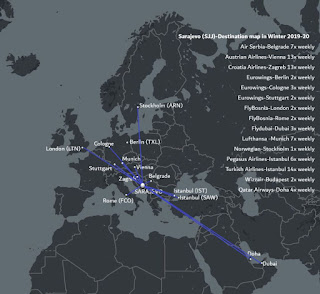 The 2019/20 winter timetable enters into force on Sunday, October 27th until March 28th of 2020. Passengers will be able to fly from Sarajevo Airport to 14 destinations in 11 countries in Europe and Gulf region. 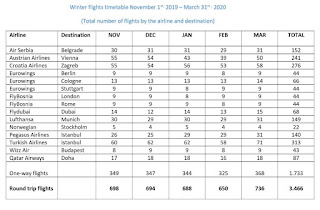 
FlyBosnia is the new airline compared to the last winter with 2 weekly flights to London and Rome, each. During winter timetable FlyBosnia will also operate many charter flights to Italy and Ireland. 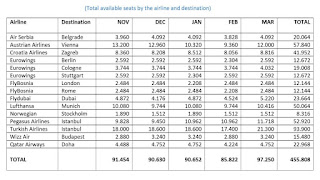 New flights this winter season  are offered by Eurowings  with two weekly Berlin Tegel-Sarajevo flights. Turkish Airlines will increase its flights from Istanbul New Airport to Sarajevo from 11 weekly to two daily. 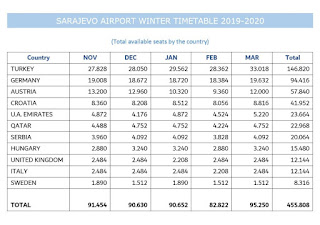 During winter timetable of flights Lufthansa has increased capacity on its daily Munich-Sarajevo route, the airline will operate Airbus 320 aircraft instead of Embraer 195. Lufthansa Airbus 320 has capacity to seat 168 passengers, while Embraer 195 offers 112 seats.
Sarajevo Airport lost its connection to Ljubljana due to Adria Airways bankruptcy. Adria Airways operated daily flights between two cities 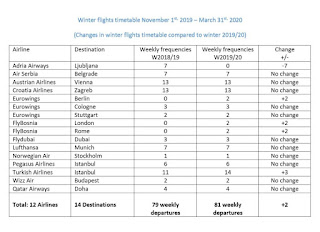 The promotional flight took off from Sarajevo Airport this morning at 7:15, arriving in Rome one hour later. Return of promotional flight is scheduled for October 20. Promotional trip organized by FlyBosnia will last three days (October 17-20) and its aimed at presenting the beauty and diversity Bosnia offers to all potential tourists and reasons why they should visit the country. Bosnia's promotional PR in Italy is Amra Silajdzic-Dzeko (the wife of Bosnian football player Edin Dzeko, currently playing for FC Roma), who has been living in Rome with her family for several years. Italian Ambassador to Bosnia and Herzegovina Mr. Nicola Minasi is also supporting the idea of establishing Sarajevo-Rome flights, and he was present on inaugural flight today.

Rome is  the second European destination for FlyBosnia after the airline established a direct flights between Sarajevo and London in September of 2019.