✈Sea Air has anounced flights from Mostar to Stuttgart 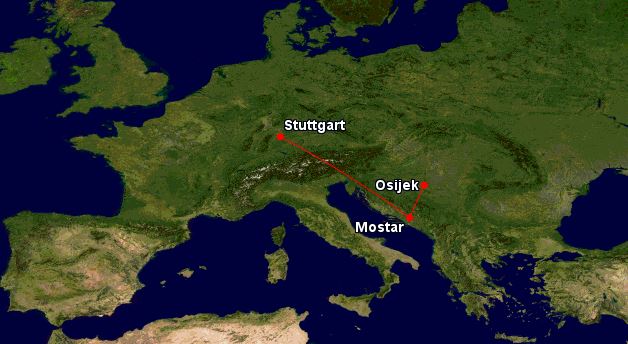 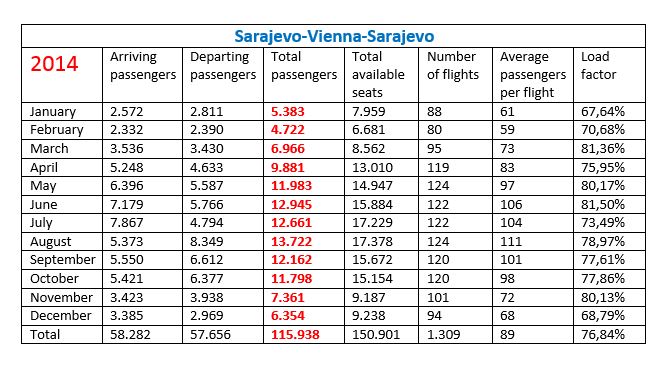 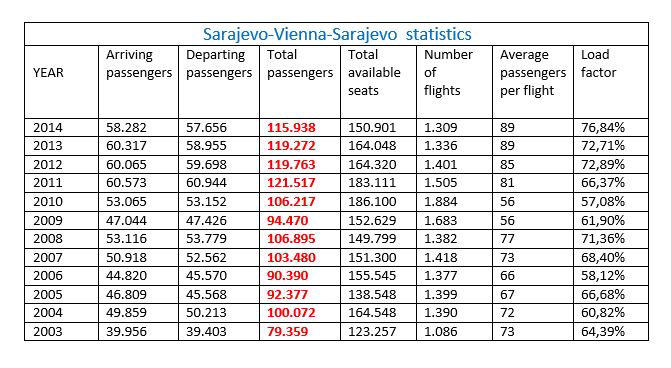 Source:FlyingBosnian
Posted by Flying Bosnian at 6:59:00 PM No comments:

The airports of Bosnia and Herzegovina continue to show great performance during the month of August, with double digit passenger growth, with the exception of Banja Luka Airport.


Source: FlyingBosnian and BHDCA
Posted by Flying Bosnian at 11:40:00 PM No comments:

What are you looking for?

The government of Bosnia's entity Serb Republic said it has given the green light for the ground handling agreement between the entity’s owned company Aerodromi Republike Srpske and Serbia's national air carrier Air Serbia to be extended.
The government said in a press release today following its weekly session that it has obliged the entity’s airport operator to finance the costs of airport services and fees for the Belgrade-Banja Luka route, from January 1 until December 31 2016, from subsidies provided for in the budget.
Posted by Flying Bosnian at 7:39:00 PM No comments: 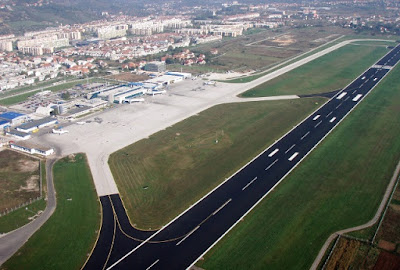 
-
Source FlyingBosnian and Sarajevo International Airport
Posted by Flying Bosnian at 12:03:00 AM No comments:

-  Sarajevo International Airport company assembly  has adopted a report on operations for last year , and the decision to pay out dividends from the profit. The airport made profit of 6.8 million Bosnian marks($3.93 mil. US) and from that amount, five million marks was paid to the budget of the Federal Government,  who is the owner of the airport - told director of the Sarajevo International Airport Ivan Veličan.
- This year the airport will record even higher profit due to increased passenger numbers and airline operations, particularly cargo operations concerning meat exports to Turkey, which goes regularly from Sarajevo Airport to Istanbul added Veličan.

Source: Fena
Posted by Flying Bosnian at 9:02:00 PM No comments:

Video from the first Mostar-Osijek-Mostar flight operated by Ukrainian Aero Jet on behalf of Sea Air with Saab 340 aircraft.
Posted by Flying Bosnian at 5:50:00 PM No comments:

✈Who is Norbert Dotterweich and Mitteldeutsche Board Entwicklungsgesellschaft ?

There is a lot of questions that need to be answered by the Government of Federation of Bosnia and Herzegovina to the public, pertaining to the credibility of the above mentioned company and its CEO. Contraindicating information came from the office of the Prime Minister Mr. Novalic about BH Airlines take over. He stated that airline from Germany will take over BH Airlines, while in yesterday’s interview to Oslobodjenje CEO of the company said that in talks with government he never intended of saving BH Airlines, instead he said talks were held about creating a new company. Hopefully this is not going to be another project where tax payers of Bosnia and Herzegovina will end up paying for the unprofessionalism of the government. Corruption is the main factor to be watchful of when it comes to projects like this one. So far all the evidence suggests that this is precisely the case.
Source: FlyingBosnian
Posted by Flying Bosnian at 7:59:00 AM No comments:

✈CEO of MDTEG:BH Airlines is company beyond repair

CEO of Mitteldeutsche Board Entwicklungsgesellschaft (MDTEG) Mr. Norbert Dotterweich told in an interview to Bosnian newspaper Oslobodjenje that BH Airlines is a company beyond repair, we should create a new company he said.
The CEO of German company Mitteldeutsche Board Entwicklungsgesellschaft confirmed talks with the Office of the Prime Minister of the Federation Bosnia and Herzegovina have started on July 10th of this year.
"Mitteldeutsche Board Entwicklungsgesellschaft mbH for some time follows projects of establishing a regional air traffic in Southeast Europe. In the center of this project is the unification of the existing air routes and harmonization of the market through existing airlines in the region as well as coverage of regional traffic in accordance with the actual needs of the individual countries in the region. The aim of the talks with the Government of the Federation of Bosnia and Herzegovina was not take over of BH Airlines. According to Mr. Norbert Dotterweich, situation in BH Airlines is beyond repair. We are testing conditions for the establishment and development of the new company in Bosnia and Herzegovina, with modified segments and a new strategic orientation. That is why the Government of Federation of Bosnia and Herzegovina and we discussed various models in order to perform that, "said Dotterweich.
The plan, as explained by Mr. Dotterweich, is to create new national airline which will be 100% percent Daughter Company of MDTEG. Federation of Bosnia and Herzegovina will be neither passive nor actively involved in the new company. For investors from MDTEG, it is important to possibly take over qualified work force from now defunct BH Airlines. Proposed model that was presented to the Government will integrate most of the workers from BH Airlines into new company.
MDTEG plans to start air traffic on 1 December 2015 with two aircraft (One Boeing 737-600 or 737-700 and Dash 8 Q300) stationed in Sarajevo.
"Air traffic will be first run under a European airline with the EU AOC (air operators certificate), which will in time be in possession of MDTEG. The new airline office in Bosnia and Herzegovina at first will be in charge of sales and management of  crew duties. After the successful implementation of the first stage of concept it is planned for the new company to get Bosnian AOC during 2016. "said Director MDTEG's.
Mitteldeutsche Board Entwicklungsgesellschaft mbH is a holding company that has investments in various European airlines and has plans to invest in new companies. The company is register in May of 2015, but the business activities of the company began in mid-2014. Current capital of Mitteldeutsche Board Entwicklungsgesellschaft amounts to 25 million euros.
Source: Oslobodjenje 9/10/2015
Posted by Flying Bosnian at 7:20:00 PM No comments:

✈Sarajevo International Airport new link with the rest of the city


Last week construction of the city's A transversal started. The road will link Sarajevo International Airport with the rest of the city, and is the first transversal, which is built on a completely new route. Total length of the road is 1,800 meters, with estimated value of the work to amount to 5.800.000 Bosnian marks. The new road will be modern boulevard with two lanes in each direction, featuring bike lane on one side of the road and green belt. With completion of Stup interchange and with soon to be finished connection to Freeway A1 (Mostar-Sarajevo-Zenica), Sarajevo Airport is very easy reachable with personal cars. Still airport is in need of public transportation service from the airport to the city center. Sarajevo is becoming very popular tourist destination and public transportation to and from the airport will play major role in attracting more tourist, especially when more low cost airlines such as Wizz air or EasyJet start operations to the city.
Source: FlyingBosnian
Posted by Flying Bosnian at 1:20:00 PM No comments: 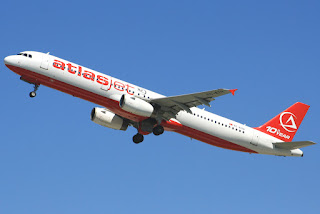 
Bosnia-Herzegovina aviation news blog is wishing to Bosnian Hajj Delegation, and all Bosnian Muslims who are performing Hajj this year, to have a safe journey, a blissful visit to the Holy places, an accepted Hajj, and a safe return to your homes and loved ones.


Source:FlyingBosnian
Posted by Flying Bosnian at 4:51:00 AM No comments:

✈Government in talks with "imaginary" company from Germany over BH Airlines future. 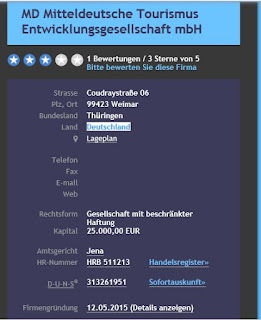 Federation of Bosnia and Herzegovina government is in talks with  "imaginary" company from Germany over BH Airlines future. According to Federal Minister of Transport and Communication, Amadeo Mandic “ solution to BH Airlines problems will be found, which will offer consumers a new and improved product. Company in question is MitteldeutscheTourismus Entwicklungsgesellschaft mbH, the company was established on 05/12/2015. and is registered as a travel agency. According to German court in Jena the company is registered with capital of 25.000 euros. Company does not have phone number, email or a website. Tax payers of Bosnia and Herzegovina need to know all these facts and  the government is obligated to present all the facts, since BH Airlines is public company. In the past Air Bosna/BH Airlines was mostly company who was employing people who were close to the ruling party in Government, knowledge and qualifications for the job were never priority for the company. High paying jobs in the company in management as well as previous CEO's of the company were appointed to the position by ruling party in Government, even though they  did not have any  qualifications nor experience in managing an airline. One and only solution for the company at the moment is dissolution. Government showed us in the past 20 years that they are totally  incompetent to run an airline.

Mostar International Airport is expecting to handle record breaking number of passengers during this month. Close to 15.000 passengers is expected to use airport during month of September. In the first four days of the month airport handled around 3.500 passengers.