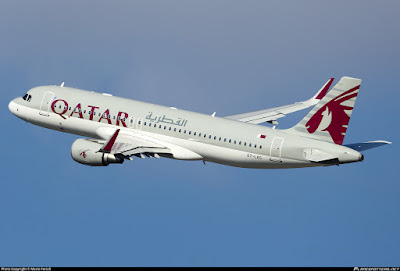 Welcome to a world where ambitions fly high.
From experienced pilots to dynamic professionals embarking on new careers, Qatar Airways is searching for talented individuals to join our award-winning team.
We take pride in our people, a dynamic and culturally diverse workforce is essential to why we are one of the finest and fastest growing airlines in the world.
We offer competitive compensation and benefit packages.

About Your Job:
We are pleased to announce an incredibly exciting opportunity to join our Commercial team in Bosnia and Herzegovina and as Commercial Manager.
As the Commercial Manager based in Sarajevo, you will add immediate value by providing overall leadership on a strategic and commercial level for all sales and other activities.  Reporting to the Country Manager you will develop and deliver revenue for Qatar Airways, maximizing the return from the existing market whilst identifying and penetrating new markets where appropriate.
This role will enable you to further develop your expertise within a fast moving environment with exceptional opportunities for career progression. This represents a fantastic opportunity to join a fast paced environment in a leading Aviation group to contribute to our continued development and evolution.
Specific accountability include:

·         Contributing to the strategic direction of Qatar Airways Corporate/ Trade and Leisure sales and defining the optimal way to increase sales by recommendations for routes, timings, aircraft type and other product development.
·         Formulating and implementing regional sales strategy locally, including local corporate dealing policy, to maximize short and long term revenue opportunities, reduce cost of sale and generate channel shift where appropriate.
·         Responsible for identification of production of new business opportunities and the development of marketing strategies in the station.
·         Contributing to the production of local station sales and channel plan including revenue targets as a part of the integrated sales strategy.
·         Managing relationships with other Airlines, Trade bodies, Government and Civil Aviation Authorities and general public in the station.
·         Steering, leading and directing the station team to deliver corporate and commercial objectives and in such a way as to enhance employee motivation and satisfaction.

About You:
The successful candidate will have the following:
·         Bachelors degree.
·         A minimum of five years relevant experience ideally in an Airline or Travel industry with a strong corporate sales background.
·         Extensive people management experience, outstanding leadership and coaching skills with the ability to motivate, set clear deadlines and manage workflow.
·         Sound product knowledge and an understanding of market practices.
·         Budgetary and planning experience.
·         Strong stakeholder management skills, excellent interpersonal skills and a ‘can do’ attitude.
Note: you will be required to attach the following:
1. Resume / CV
Follow this link to apply

Beautiful video filmed from a cockpit of a Lufthansa Airbus A319 on flight from Munich to Sarajevo and back! ENJOY !

Norwegian Air is introducing new one weekly summer seasonal service from Gothenburg to Sarajevo, airline’s second destination from Sweden after Stockholm Arlanda which is served on year-round basis. Gothenburg-Sarajevo flights will run from June 21 to August 9. Total of 8 flights in each direction are scheduled offering 3.024 seats on board of Boeing 737-800 aircraft.

Norwegian Air is reintroducing its service from Oslo to Sarajevo. This summer season Norwegian Air will operate a total of 31 flights in each direction (62 flights in total) offering 11.718 seats. Last year Norwegian operated a total of 70 flights between two cities, offering 13.230 seats in both directions. At first airline decided to discontinue the route altogether but after a plea from Bosnian Embassy in Norway the airline decided to restart service as summer seasonal from May 25 to October 26.

This summer season Norwegian Air will maintain one weekly flight between Stockholm Arlanda Airport and Sarajevo, representing a decrease over last year’s two weekly for whole summer schedule from April until October. Two weekly flights will be operated only during July.

Copenhagen-Sarajevo service will be operated with two round-trip flights in June, four in July and two in August.


Norwegian Air will serve four destinations from Sarajevo in Scandinavia this summer, record number for one airline since collapse of Air Bosna. 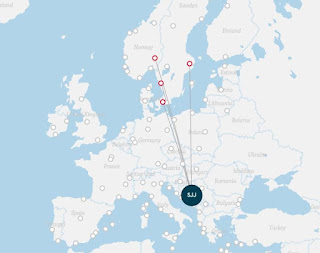 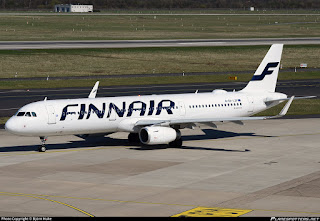 For the European Youth Olympic Festival (EYOF-2019) Sarajevo airport will handle many charter flights starting today with Aeroflot’s Airbus 321 from Moscow. Passengers and aircraft traffic during month of February is considered one of the slowest in a whole year. Sarajevo airport will great many general aviation and private aircraft as well which will help to boost this month’s passengers numbers.

✈The Olympic Flame returns to Sarajevo 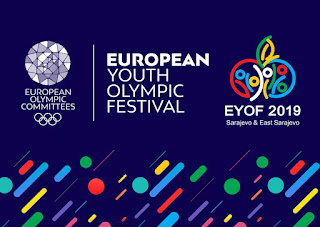 After a four-day trip from Rome to Banja Luka, the Flame of Peace arrived in Sarajevo on February 02.2019. The European Youth Olympic Festival (EYOF-2019) welcome ceremony took place at Sarajevo International Airport. Thanks to FLYBOSNIA, the delegation landed at the airport on time and safely. FlyBosnia applied special livery for EYOF. The Airbus 319 made its first scheduled charter flight Sarajevo-Banja Luka-Sarajevo transporting EYOF-2019 delegation and official Flame of Peace

This is a festive moment for Bosnia and Herzegovina, bringing back good memories of unity and peace of 1984 Winter Olympics Games held in Sarajevo 35 years ago. The Flame of Peace will be lit at the "Asim Ferhatović Hase" Stadium, on February 10th, when the European Youth Olympic Festival will officially start.
The ceremony of greeting the Flame of Peace was attended by members of Bosnia and Herzegovina Presidency Šefik Džaferović and Željko Komšić, the Chairman of the Council of Ministers of Bosnia and Herzegovina Denis Zvizdić, and representatives of the Canton and City of Sarajevo, as well as numerous athletes.

Mayor of Sarajevo Abdulah Skaka said that he is proud that the Olympic torch is in Sarajevo again.
"I want our children to live the values ​​of the Olympic spirit. It is our obligation to create platforms, and EYOF is one of them. EYOF is an opportunity to jointly build some new, better and more positive times. I sincerely hope EYOF will awaken the Olympic spirit in our city", Skaka said.

Nenad Vuković, the mayor of the city of East Sarajevo, addressed the attendees.
"This is a great opportunity to show how we can do great things together. In the coming days, we will have the opportunity to send a positive image to 46 countries whose representatives will arrive in our country", said Vuković.

Željko Komšić said that it is a pleasure to be in this place and to be able to take part in such a big sporting event, the largest since the Winter Olympic Games in 1984. He wished good luck to the organizing committee and to all the people who are ready for the upcoming Festival. 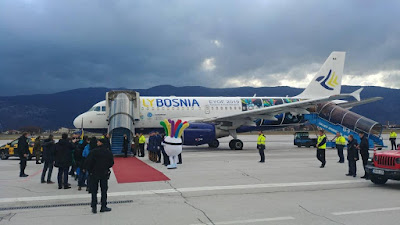 FlyBosnia A319 with EYOF-2019 Sarajevo sticker

First month of the year Sarajevo Airport registered slight passengers decline of 1%. Airport recorded 10% decline in aircraft operations or 100 operations less then in January of last year. Even though airport recorded significant decline in aircraft operations, the airlines are using larger aircraft on its scheduled flights to/from Sarajevo compensating with aircraft with larger capacities. During month of January Turkish Airlines majority of its flights operated with Airbus 321, Austrian Airlines operated about 50% of its flights using Airbus 319 instead of much smaller Airbus 220, while Air Serbia used Airbus 319 twice to three times weekly. Croatia Airlines used Airbus 319 couples of times on its flights to Sarajevo during January too. 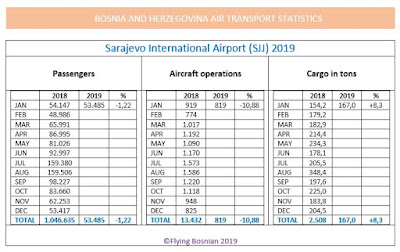 Month of February should see solid increase in passengers due to Sarajevo hosting European Youth Olympic Festival (EYOF) from 09-16 February 2019. Total of 1.100 athletes will participate in the games from 46 national federations, many of them arriving by air using Sarajevo Airport.

Saudi Arabian low cost carrier Flynas will introduce summer seasonal flights between Riyadh and Sarajevo. Flights are scheduled to operate from June 2 to August 30. Flights will operate three times a week on Wednesdays, Fridays and Sundays with Airbus 320 aircraft, offering 8 seats in business class  and 156 seats in economy class. Flights will increase to five weekly during July and August.
The flights are pre-booked by Shiddi Tourism travel agency for tourist from Saudi Arabia, whose parent company, the Al Shiddi Group is owning hotels and resorts through the Bosnia and Herzegovina.
Flynas has a fleet of 33 Airbus A319 and A320 aircraft, including neo jets, as well as code-share agreements with Etihad Airways, Pegasus Airlines and Jet Airways.
Last year, services between Riyadh and Sarajevo were operated by the Saudi subsidiary of Egypt's Nesma Airlines.
Flynas is the third carrier to announce new flights to Sarajevo for the coming summer season, joining Aegean Airlines from Athens and Tunis air  from Monastir. 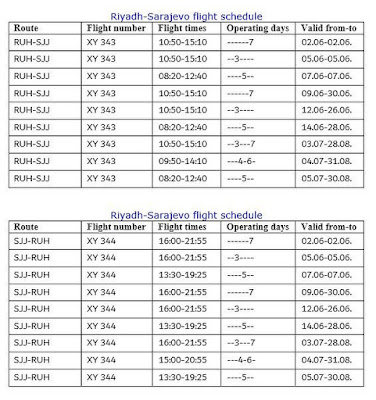 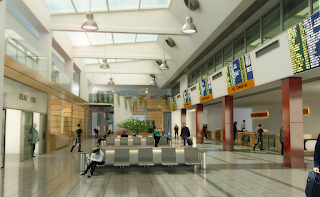 Tuzla Airport new terminal interior
First month of the year Tuzla airport registered 10% passengers decline due to Wizz Air discontinuing four destinations from the city, compared to the same time of the last year. Total 36.341 passengers traveled through Tuzla Airport in January. Destinations Wizz Air has suspended at the beginning of the winter timetable in October will be operational again as of March 30th. In January Wizz Air had 42.480 seats on offer on 236 flights. Average cabin load factor (CLF) on Wizz air flights from/to Tuzla in January stood at 85,54% or 154 passengers per flight (Wizz Air Airbus 320 has capacity to seat 180 passengers). 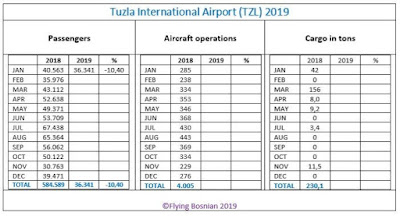 ✈FlyBosnia aims for 3 aircraft by year-end 2019 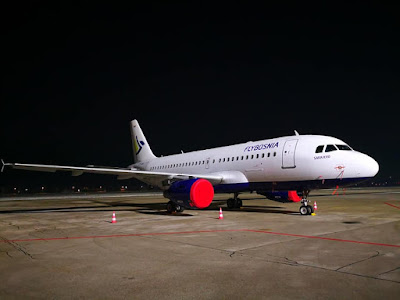 FlyBosnia is planning to add a further two A320 Family narrowbodies on top of the single A319-100 it has already taken, CEO Chris Gabriel told English-language Sarajevo Times.

"We are aiming to have another two aircraft this year and, by the end of five years, we aim to have a fleet of five aircraft. We are looking to increase the number of flights in and out of Sarajevo by more than double in the next twelve to fifteen months," Gabriel said.

The Bosnian start-up, a first attempt at creating a Sarajevo-based carrier since the collapse of B&H Airlines (JA, Sarajevo) in 2015, planned to launch on January 31, 2019, although the date will be postponed. FlyBosnia's website remains inactive and its only aircraft, an ex-Rossiya A319 E7-FBA (msn 1808) has just returned from Sofia for maintenance.

The airline plans to announce its schedule and commence sales within the next "one or two weeks". Besides tickets, it will also sell package tours in Bosnia and Herzegovina.

Gabriel said that the airline would like to initially serve London and Frankfurt Int'l in Europe, as well as Riyadh, Jeddah, and Bahrain Int'l in the Middle East. Going forward, FlyBosnia will focus on Europe and the Middle East with Rome, Paris, Moscow, Beirut, and Kuwait listed as potential future destinations.

"In addition to that, we have received numerous charter requests. So many in fact that we probably can’t fulfil the demand in the early stages. We have built our schedule up and we are just slotting those charters in. We are in the process of getting slots at the various airports we intend to fly to," the CEO added.