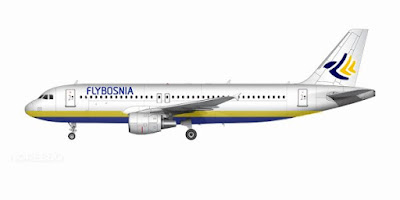 FLYBOSNIA owner Shiddi group has posted schedule for the airlines first destination. From June 10. to September 27. newly established Bosnian airline will maintain daily flights between Sarajevo and Riyadh. Flights from Sarajevo to Jeddah are planned as well. FLYBOSNIA is in final stage of obtaining Bosnian AOC (Air Operator Certificate). Flights will operate with Airbus 320 aircraft. 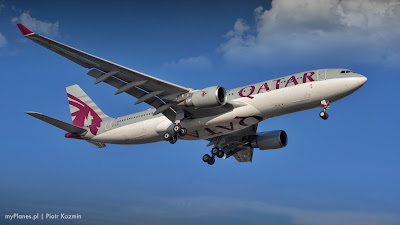 Qatar Airways will operate its wide-body Airbus A330-200 aircraft from Doha to Sarajevo on May 29 and June 03. It marks the first time that airline will send its 260-seat aircraft to Sarajevo. The change from Airbus 320 to Airbus 330-200 comes due to operational reasons (increased demand on those days). 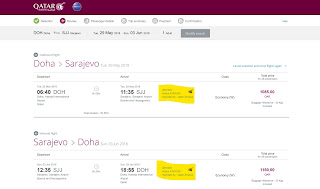 Qatar Airways currently operates four weekly flights from Doha to Sarajevo, with plans to increase flights to daily using Airbus 321 aircraft in the near future. This will be only second time in Sarajevo Airport history that scheduled flight is operated with wide-body aircraft. Last time an airline used wide-body aircraft on its scheduled flights to Sarajevo was back in 2013 when Kuwait Airways used its Airbus 300-600 to operate two weekly flights from Kuwait City. 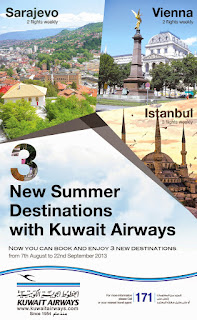 ✈Local Government will continue to subsidize Eurowings flights to Mostar ! 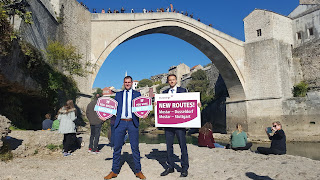 The Government of Herzegovina-Neretva County, at a session held on Friday in Mostar, gave its consent to subsidize Eurowings flights to Mostar International Airport. In the budget for 2018, the Government secured 500.000 KM (255.000 Euros) for this purpose, and has pledged to provide funds for subsidizing the expenditures in the budgets for the period from 2019 to 2023. 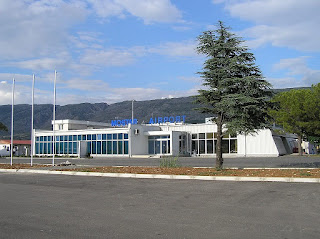 “Considering that Mostar International Airport provides general services of economic interest, the contribution to better mobility of citizens becomes visible. Connecting Mostar and the Herzegovina-Neretva County, with wider region, seeks to create the best possible conditions for a stronger economic development. This will be done particularly through better air transport links, as well as the availability/increase of tourist demand in Herzegovina-Neretva destinations. “, said Nevenko Herceg, the Prime Minister of the County. 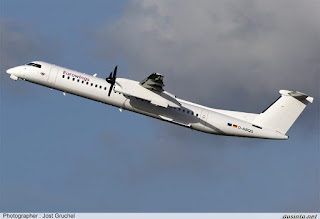 Eurowings is scheduled to start Summer seasonal flights from Dusseldorf and Stuttgart on May 16. Flights will operate twice a week from each destination. Eurowings will be using Bombardier Dash 8-Q400 turboprop aircraft with capacity to seat 76 passengers. Flights will be operated by  Luftfahrtgesellschaft Walter (LGW) on behalf of Eurowings. 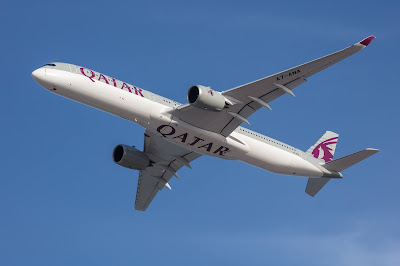 Welcome to a world where ambitions fly high

From experienced pilots to dynamic professionals embarking on new careers, Qatar Airways is searching for talented individuals to join our award-winning team.

We take pride in our people—a dynamic and culturally diverse workforce is essential to why we are one of the finest and fastest growing airlines in the world.

About Your Job:
Do you feel you’re really going places in your current job? With Qatar Airways, you will be.

As the National Airline of the State of Qatar, we seek to reflect the best of Qatar's warm and generous hospitality.

Dinner in Paris, Lunch in New York, Breakfast in Montreal, while cruising around the world at 40,000 feet on some of the most modern aircraft in the world is definitely not your typical office job. Qatar Airways is known to be a truly world class, 5 star global airline, challenging established norms and a leader in airline hospitality. On the Ground and in the air we offer our customers a powerful approach to service. Our Cabin Crew are Qatar Airways' Ambassadors to the world.

The Qatar Airways Cabin Crew team is growing. We are looking for candidates who can deliver our mission by providing "Excellence in everything we do". Known for our 5 star hospitality, we look for future Cabin Crew who can be part of our "World Class Global Brand". Join our multinational Cabin Crew Team and enjoy a tax-free remuneration package including accommodation, allowances and transportation for duty.

Write your own story with Qatar Airways. World’s 5 star airline.

Qatar Airways is proud to be an employer of choice for many candidates from around the world. However, there are unscrupulous individuals who look to take advantage of this.

Qatar Airways never charges applicants for interviews, security deposits, or for placement. If you are asked for money as part of any Qatar Airways recruitment, please do not pay and report it to reportfraud@qatarairways.com.qa with all accompanying e-mails and documents.

About You:
To be part of this winning team, you need to meet the following requirements:

Minimum age of 21 years
Minimum arm reach of 212 cms on tip toes
Minimum high school education with fluency in written and spoken English
Excellent health and fitness
Willingness to relocate to Doha, Qatar
Outgoing personality with good interpersonal skills and the ability to work with a multinational team.

*Please note that this event is an Open day, where you are required to come and submit your application
personally.

1 x passport photograph taken in the same dress code mentioned above (without glasses).

Note: you will be required to attach the following:

Source:Qatar Airways
Posted by Flying Bosnian at 5:55:00 PM No comments: 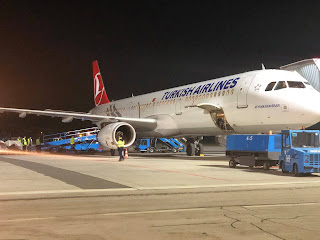 Turkish Airlines A321 at Sarajevo Airport
Sarajevo International Airport is on the way to record another record month. During month of April many airlines have increased capacity due to high demand for the seats. Lufthansa is regular with its Airbus 320 aircraft instead of mix of Airbus 319 and Embrear 195 past years. Turkish Airlines is utilizing its Airbus 321 with 180 seats on most days with two daily flights. Austrian Airlines is sending its high-density Airbus 321 with 200 seats on short 50 minutes flight from/to Vienna. Air Serbia is using a mix of Airbus 319, Boeing 737 and ATR72 instead of just ATR72 last year. Eurowings is very successful on its Cologne-Sarajevo sector with Airbus 320 offering 174 seats, instead of last year’s Airbus 319. Sarajevo International Airport is expecting to handle around 85.000 passengers in April.

Airlines with increased capacity during next week

Ryanair, Europe’s No.1 airline, today (23 Apr) announced its first flights from Bosnia and Herzegovina with two new routes from Banja Luka to Brussels Charleroi and Memmingen. Both routes will operate twice weekly from November, as part of its Winter 2018 schedule, and go on sale later today from the Ryanair.com website.
Bosnia and Herzegovina is Ryanair’s 37th country of operation and customers can enjoy even lower fares and the latest “Always Getting Better” improvements including: 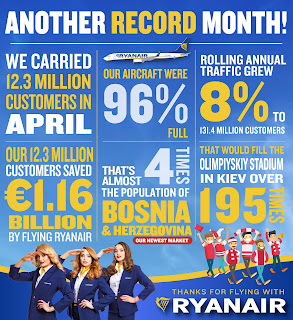 Ryanair’s Sales and Marketing Manager for CEE, Olga Pawlonka said:
“Ryanair is pleased to announce our first flights to/from Bosnia and Herzegovina (our 37th country of operation), initially with two routes from Banja Luka to Brussels Charleroi and Memmingen commencing in November. Both routes will operate twice weekly as part of our Winter 2018 schedule, and go on sale later today from the Ryanair.com website.
To celebrate we are releasing seats for sale from €19.99 for travel from November, which are available for booking until midnight Wednesday (25 Apr). Since these amazing low fares will be snapped up quickly, customers should log onto www.ryanair.com and avoid missing out.”
Banja Luka’s Acting General Manager, Duško Kovačević said:
“Ryanair comes to Banja Luka Airport. This is a big day for our airport, City of Banja Luka, the Republic of Srpska and Bosnia and Herzegovina. It will provide our citizens with the possibility to travel, through Brussels and Memmingen, to over 90 destinations in several European countries. Young people will have the chance to travel more, and our friends from Europe will find it easier to visit us and discover the beauties of Banja Luka and Banja Luka region, as well as the attractions of our unique rivers and mountains, and hospitability of our people.”
Source: Ryanair
Posted by Flying Bosnian at 2:52:00 PM 2 comments: 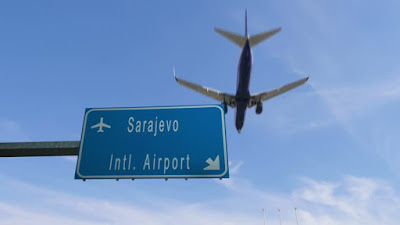 Sarajevo International Airports have registered strong passenger growth in the first quarter of this year. Airport added 27.244 passengers in the first quarter of the year, an increase of 19%, compared to the first quarter of last year. Last month Sarajevo Airport registered another record month with double digit growth in passengers. Total of 65.911 passengers used Sarajevo Airport in March, representing an increase of 15% on the same month of last year. With the beginning of summer timetable of flights many airlines have increased flights and capacity on its flights to and from Sarajevo, continuing the trend of double digit growth. 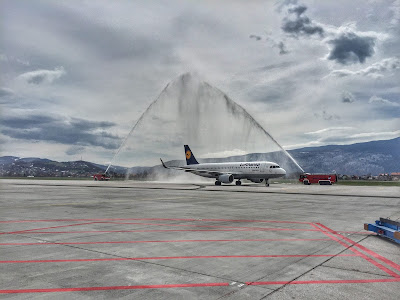 German national airline and the largest airline in Europe Lufthansa has marked the 20th anniversary of its regular, direct flights Munich-Sarajevo-Munich. The event was marked at the Sarajevo International Airport on Thursday in presence of German Ambassador to Bosnia and Herzegovina Christiane Hohmann. 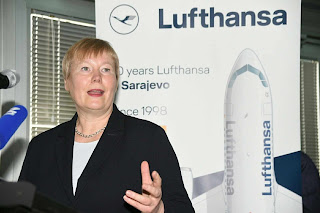 General manager of Sarajevo International Airport Armin Kajmakovic stated on this occasion that Lufthansa was one of the first airline companies that started scheduled operations from Sarajevo after the end of the war, which significantly contributed to Sarajevo's connecting with Europe and the rest of the world, normalizing life in Bosnian capital and strengthening the economic image of the country. 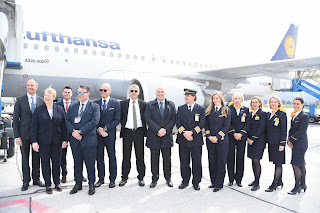 He also said that more than 10 million passengers have passed through the Sarajevo Airport since arrival of Lufthansa and that significant growth was recorder in 2017. "This year we expect our millionth passenger in one year", he added. 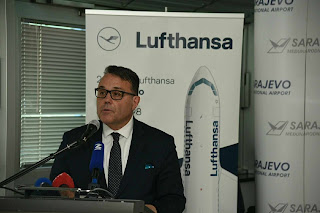 Ambassador Hohmann emphasized she was honored and privileged to attend the anniversary of Munich-Sarajevo-Munich line and of Lufthansa-Sarajevo Airport cooperation.German companies have invested 350 million Euros in Bosnia and Herzegovina over the past 20 years and they intend to stay here and strengthen business cooperation, she stressed, adding that Bosnia and Herzegovina export to Germany is recording solid increases year after year. 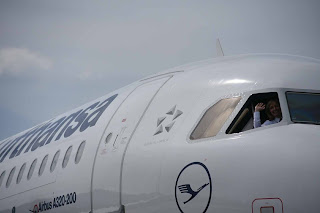 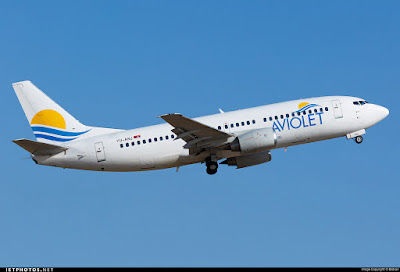 Banjaluka International Airport will be connected with Antalya this summer with charter flight organized by Kontiki travel agency. Banjaluka-Antalya flights will be operated by Air Serbia charter brand Aviolet once per week, every Tuesday from June 19 to September 11. Flights will operate on board of Boeing 737-300 with 144 seats in all economy configuration. Total of 13 round trip flights from Banjaluka are scheduled.

The travel arrangements are based on minimum of 120 bookings per each charter flight. Kontiki travel agency reserves the right to cancel the travel arrangements, change the airport of departure, change the travel program or date of travel. Travel agency is liable to give passengers notice of change at least five days before planned start of travel. For more information please visit Kontiki Travel