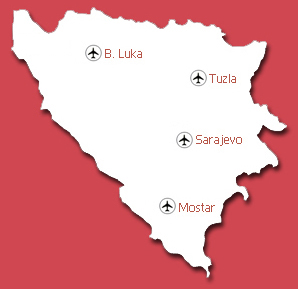 The Government of Federation of Bosnia and Herzegovina has approved transfer of funds from the 2017 budget, in the amount of 11,4 million Bosnian Marks (BAM) or 5,8 million Euros , for the improvement of air transport infrastructure in Federation of Bosnia and Herzegovina. Federal Ministry of Transport and Communications will oversee distribution of funds to the assigned projects at three Bosnian airports (Mostar, Tuzla and Bihac). At the beginning of the year government allocated 6 million Bosnian marks for the above-mentioned airports. At today’s session government has decided to increase funds for each airport, with new approved funds airports will get 11,4 million Bosnian Marks for the improvement of airports infrastructure and subventions of new air services. Funds are collected through departing passengers at Sarajevo Airport. Each departing passenger from Sarajevo Airport pays 20 BAM tax for aviation development in Bosnia and Herzegovina. In the past, these funds were used to finance BH Airlines. Since BH Airlines ceased operation the government is using collected funds for development of Tuzla, Mostar and Bihac airports. This year around 450.000 passengers departed Sarajevo Airport, contributing around 9 million Bosnian Marks to the air transport improvement fund.

According to Government of Federation of Bosnia and Herzegovina funds will be distributed as follows:

Bihac Airport will receive 4.000.000 BAM. Additional resources are intended for the real estate expropriation - the expansion of the land for the airport to extend the runway.

Tuzla Airport will receive 3.570.000 BAM. Additional funds will be used for capital investments for the reconstruction and upgrading of the passenger terminal building - Phase2 - 1.154.580 BAM, for the construction of a customs warehouse for aviation fuel 269.000 BAM and for the purchase of the equipment (mower and snowmobile tractors in the amount of 576.420 BAM). 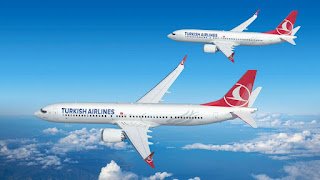 In upcoming summer season, travel agencies from Bosnia and Herzegovina will offer tourist packages to Turkish Riviera resorts with direct charter flights from Sarajevo and Tuzla to Antalya. Flights from Sarajevo will be operated by Turkish Airlines and Tailwind Airlines, while flights from Tuzla Airport will be operated by Free Bird Airlines. Total of 54 round-trip flights will be operated by Turkish Airlines using Boeing 737-800 aircraft, offering total of 17.820 seats in both directions. In summer of 2018 Turkish Airlines will increase charter flights to Antalya by 45% compared to last summer. Last summer season the airline operated a total of 37 round-trip flights between Sarajevo and Antalya, while in 2018 the number of flights will go up to 54. Number of available seats in 2018 is 17.820 in both directions, compared to 12.210 in 2017. With such increase in tourist flow between Sarajevo and Antalya it is very likely that either Pegasus or Turkish Airlines will introduce summer seasonal flights from Antalya to Sarajevo soon. For vacation package bookings please visit Fibula.ba 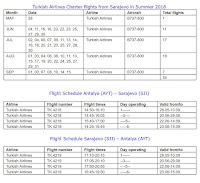 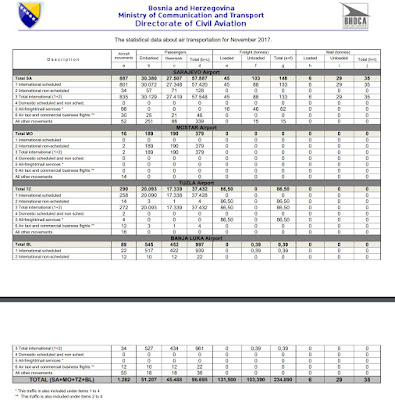 TUI fly Belgium and Atlas Global Airlines have cancelled Sarajevo service. Both airlines introduced flights to Sarajevo in the first half of 2017, TUI fly Belgium started its two-weekly service from Brussels Charleroi Airport on March 26, ending flights on October 30. Flights were operated as summer seasonal but after only one season TUI fly decided to cancel the flights due to poor loads.

Atlas Global Airlines started flights from its hub at Istanbul Ataturk Airport to Sarajevo on June 23 with four weekly flights, flights were scheduled as year-round, but after only four months the airline suspended its service saying it will resume flights at the beginning of April as summer seasonal. Yesterday we received confirmation from Atlas Global Airlines saying that airline will not return to Sarajevo and all flights have been canceled. Intense competition from Turkish and Pegasus Airlines have forced Atlas Global to cancel Sarajevo service. During summer season Turkish Airlines is maintaining 18 weekly flights between Istanbul Ataturk Airport and Sarajevo, while Pegasus Airlines maintains 9 weekly flights between Istanbul Sabiha Gokcen Airport and Sarajevo.

During January-October period, a total of 20.708 passengers traveled on Wizz Air flights between Tuzla and London Luton Airport. The airline operated a total of 152 flights between two cities, with an average cabin load factor of 75,00%. Wizz Air has discontinued this route on 28.10.2017, after operating flights for one year only. The airline did not issue official statement on flight cancellation but most likely due to the visa requirements for Bosnia and Herzegovina citizens and long and costly process of obtaining visa to enter United Kingdom the interest for the flights wasn’t substantial for Wizz Air to continue to operate the flights. This route was the only one connecting Bosnia and Herzegovina and United Kingdom. In March of 2007 British Airways started flights from London Gatwick airport to Sarajevo. Flights were operated three times per week with Boeing 737-400 aircraft, but flights were short lived and stopped in October of the same year due to high fuel prices and high operating expenses stated by British Airways. 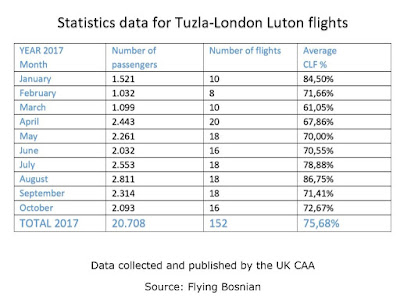 ✈FlyBosnia has submitted a request for Bosnian AOC

After last week announcement about the newly founded airline company FlyBosnia (owned by Al Shiddi Group), we tried to find out more information about the plans of the company. We contacted Bosnia and Herzegovina Directorate of Civil Aviation (BHDCA) for more information.
Spokesman for Bosnia and Herzegovina Directorate of Civil Aviation, Mr. Aleksandar Lalovic confirmed to the portal Akta.ba that FlyBosnia has submitted a Request for Air Operator Certificates.

"The Directorate for Civil Aviation of Bosnia and Herzegovina (BHDCA) received the Request for Air Operator Certificate from FlyBosnia on November 13, 2017. According to the law of Bosnia and Herzegovina, BHDCA will carry out an analysis of the submitted documentation and an assessment of the company for meeting the conditions for obtaining Air Operator Certificate (AOC) ", confirmed Lalovic.

We also learn that Haris Čoloman, a former manager of Bosnian Wand Airlines, was appointed as a company director, who forwarded all our questions to the company’s official PR agency, Foto Art.The PR agency issued following statement:

"We will organize a press conference, presenting FlyBosnia to the public in more detail. At this moment we can confirm that FlyBosnia is a company that wants to connect Sarajevo and Bosnia and Herzegovina with the rest of the world. Since the company is registering and developing business plans in accordance with Bosnian aviation law, we are not able to provide any more information now. We can confirm that FlyBosnia is recruiting new cabin crew members (through employment agency Posao.ba). On FlyBosnia website, which is under construction, you will have the opportunity to find out more information soon" the PR agency said.

Source: Akta.ba
Posted by Flying Bosnian at 9:53:00 PM No comments:

2017 will be marked as a very successful year for the civil aviation air transport in Bosnia and Herzegovina. Sarajevo and Tuzla Airports recorded double digit passenger’s growth. During the year Sarajevo Airport welcomed six new airline companies with seven new routes from the city, while Tuzla Airport has seen five new routes from the city across European continent. Both Airports started expansion of terminal buildings and maneuvering areas of the airport. In 2017, Mostar Airport worked on expanding its facilities and upgrading equipment in preparation for 2018 when new scheduled flights with Eurowings to Dusseldorf and Stuttgart will begin. Possible new routes from Mostar Airport in 2018 are Zagreb, Malmo and Billund. Number of air passengers in Bosnia and Herzegovina during 2017 increased by an impressive 25% to 1,5 million. Majority of passengers used Sarajevo and Tuzla airports. Banja Luka is the only Bosnian airport that did not record any progress in 2017.

Map of new established routes in 2017 from Sarajevo and Tuzla