Mostar Airport has reached agreement with Eurowings to restart seasonal flights from Mostar to Duesseldorf and Stuttgart in summer of 2019. Flights from Duesseldorf will restart on May 5th with one weekly service, while flights from Stuttgart will start one month later on June 5th with two weekly flights. Flights are scheduled to operate with Airbus 319 aircraft. 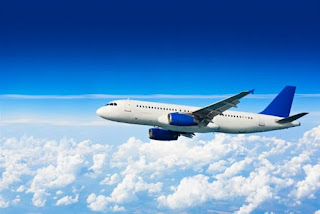 Tuzla Airport has seen its passenger numbers decline by 18% due to Wizz Air converting four routes to summer seasonal and frequency cuts on existing routes. Winter cuts are coming as a result of airport's management not being able to meet basic infrastructure conditions for airport to run safe operations during winter months when visibility is low. Installation of new approach lightning system has been delayed for second winter in a row due to incompetent  management of the airport to complete the task, even though all funds are provided and financed by the Government of Federation of Bosnia and Herzegovina.
Another major issue contributing to Wizz air flight cuts from Tuzla is terminal building reconstruction, with finishing date  being delayed numerous times. Terminal building was scheduled to be finished before April of this year but unfortunately work is still going on without the set date for terminal completion. Yet again airport management is to blame for choosing construction company without any references and previous experience in airport terminal construction. 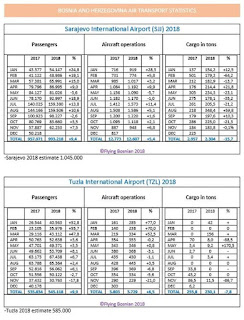 Banja Luka Airport recorded its busiest month ever since opening its doors in 1976. The airport recorded 8.272 passengers, an increase of 730% compared to November of the last year. Record numbers increases are result of Ryanair starting flights to the city from Brussels-Charleroi, Memmingen and Stockholm-Skavsta. Banja Luka airport is expecting to finish this year with 35.000 passengers.

Croatia Airlines is the only airline operating flights to Mostar, with two weekly flights from Zagreb. During November Croatia Airlines transported  279 passengers on 14 flights. Flights were operated with Dash 8-400 aircraft with capacity to seat 76 passengers. Croatia Airlines managed to sell only 279 seats out of 1064 available, with average cabin load factor of only 26%. These flights are heavily subsidized by the Government of Federation of Bosnia and Herzegovina and Neretva County, but with such poor interest and very low load factor the future of these flights is very uncertain. 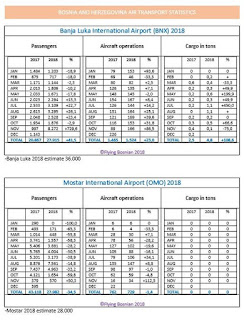 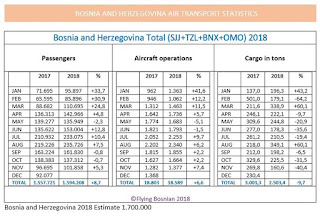 Travel agencies from Bosnia and Herzegovina have started selling tourist packages for Turkish Riviera for summer of 2019. Turkish Airlines will operate largest number of the charter flights, a total of 89 round-trip flights are scheduled, representing an increase of 59% compared to the summer of the last year. Turkish Airlines will operate six flights per week from May 31. to September 21, with Boeing 737-800 aircraft, offering a total of 29.370 seats in both directions. For vacation package bookings please visit Fibula.ba 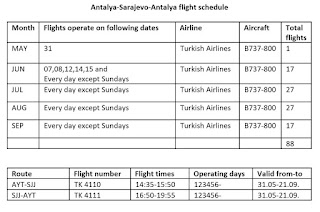 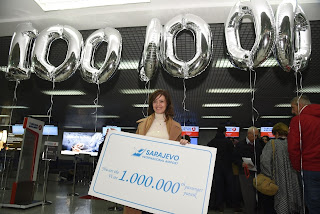 Sarajevo International Airport handled its millionth passenger today, Aida Birno who was flying to Istanbul with Turkish Airlines, is the first millionth traveler in a single calendar year for the airport. The one millionth passenger was awarded with Gift Certificates for the Airport’s Duty Free Shop and Turkish Airlines round trip ticket  from Sarajevo to Istanbul.
This figure represents a growth of 9 percent over the same period of last year, and growth of 25 percent compared to 2016. With more than 1.000.000 passengers per year, 13.000 flight operations and handling more than two million kilograms of cargo goods, Sarajevo International Airport is the busiest airport in Bosnia and Herzegovina
Sarajevo International Airport Director Armin Kajmakovic, who presented a gift to a happy passenger, noted that this was very important event in the history of the airport.
"My sincere congratulations to our millionth passenger and to our most important strategic airline partner Turkish Airlines, who transports the largest number of passengers from the airport with 20% passenger share, "Kajmakovic said. 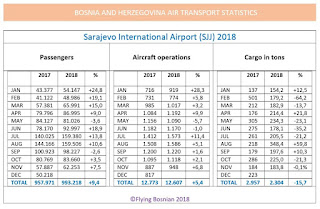 Source: Routesonline
Posted by Flying Bosnian at 12:44:00 PM No comments:

Ryanair opened reservations for its fourth route from Banja Luka,  Berlin Schönefeld Airport, will be served with two weekly flights starting April 03. 2019. Flights are already on sale at Ryanair.com