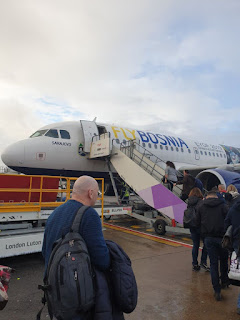 During December-January FlyBosnia is recording much better bookings on its flights between Sarajevo and London Luton. The airline is managing to record increased bookings for winter ski holidays in Bosnia. Todays flights from London Luton Airport to Sarajevo was almost full. 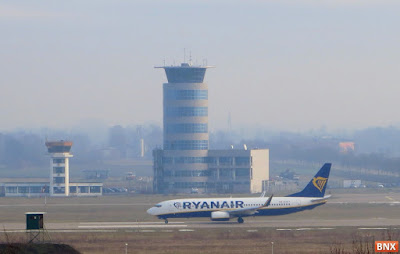 For the first eight months of the year Ryanair has transported a total of 26.460 passengers between Memmingen and Banja Luka. The airline operated 140 flights, offering 26.460 seats with an average cabin load factor of 83,07%. 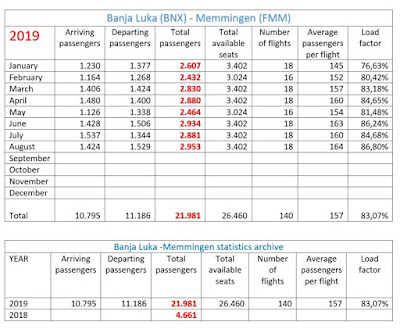 ✈Bosnia and Herzegovina tourism statistics for 2019 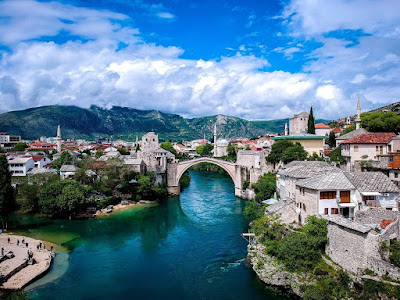 Largest increase of foreign tourist is recorded by tourists from China with +82% or 42.652 tourists more when compared to the same time of last year. By the end of the year number of Chinese tourist could reach 115.000, putting China on the second place by the number of tourists, right after Croatia. Large increase of Chines tourists is due to the fact that Bosnia and Herzegovina and China have abolished visas for tourist visit purposes for its citizens. With such demand for travel from China to Bosnia and Herzegovina it is very likely that direct flights from China to Sarajevo will be established soon. Last year talks were held about possible establishment of flights from China to Sarajevo via Belgrade. 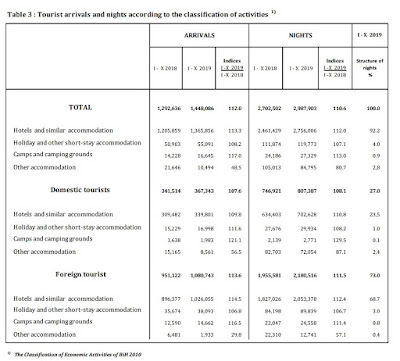 Foreign tourist visits to Bosnia and Herzegovina. Countries with over 10.000 visitors (January-October 2019) 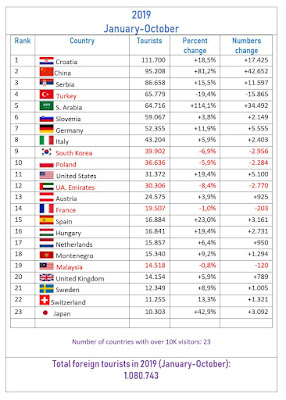 Source: Flying Bosnian and Bosnia and Herzegovina Agency for Statistics 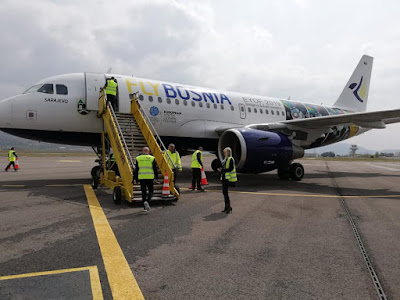 Today FlyBosnia is introducing one weekly service between Mostar and Rome. As of today,  one of FlyBosnia two weekly flights between Sarajevo and Rome will have a stop in Mostar.

Mostar is very interesting to the citizens of Italy because of its proximity to Medjugorje as one of the most famous Roman Catholic pilgrimage destinations in the world. Medjugorje became known through the apparitions of the Virgin Mary‚ which began to emerge as a phenomenon in 1981‚ after which religious tourism began to develop in the city. Since then‚ this place of Herzegovina‚ besides Sarajevo‚ is one of the most visited tourist centers in Bosnia and Herzegovina‚ visited annually by around one million people from all over the world.
Source: FlyBosnia 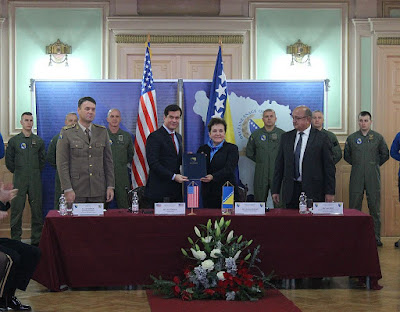 On Friday, December 13, 2019, the Minister of Defense of Bosnia and Herzegovina, Marina Pendes, in Sarajevo, signed a contract for the purchase of four US-made Bell Huey II helicopters for the needs of the Armed Forces of Bosnia and Herzegovina.
The contract on procurement of four helicopters military markings UH-1H-II has a total value of 38,539.378 US dollars, of which Bosnia and Herzegovina took part with a 4,360.000 dollars, or 7.5 million Bosnian Marks. The remaining amount was provided by the Government of the United States of America through funds from the US Foreign Friendly Sales (FMS) and Foreign Military Funds (FMF) friendly programs. 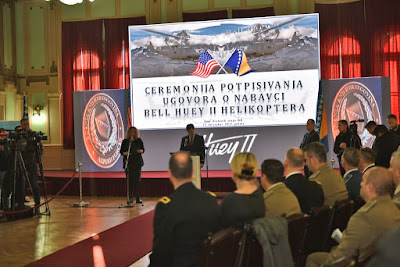 The UH-1H-II helicopter has been modernized, upgraded and maintained for a cheaper variant of the UH-1H Iroquois general purpose helicopter (also known as "Huey"), which is in the inventory of the Air Force and Air Defense Brigade of the Armed Forces of Bosnia and Herzegovina. With this acquisition, the Brigade will be able to continue and better perform its mission of air transportation, medical evacuation, firefighting, search and rescue, as well as other tasks in completing the main missions of the Armed Forces. 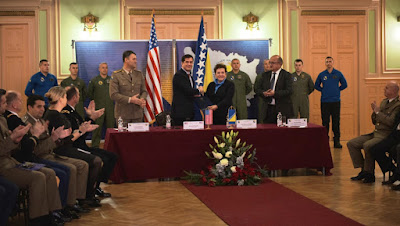 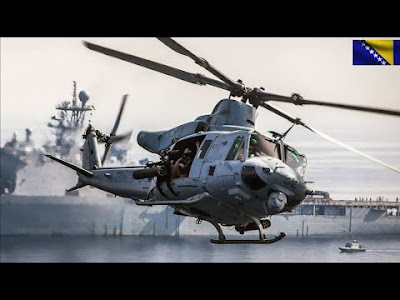 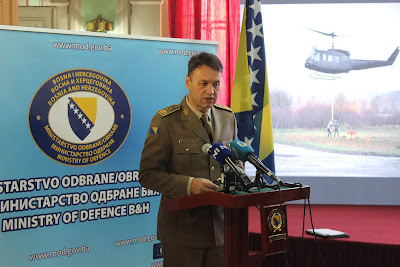 As he pointed out, "in the process of rejuvenation of the pilot and aeronautical and technical personnel it will be easier to receive and adapt new members of the Air Force and air defense of the Armed Forces of Bosnia and Herzegovina, and to ensure the replacement of the generations that awaits us in the coming period." 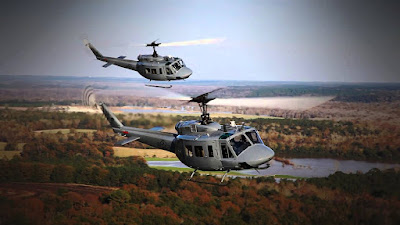 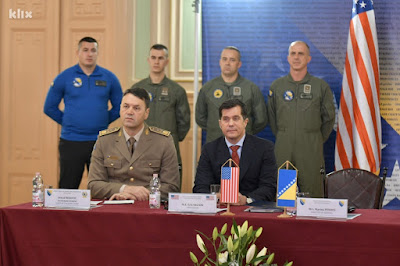 The procurement of new aircraft was contracted with the great support of the US Government on the principle of "Total Package Approach", which for the said sum implies complete transfer of capabilities and ensures: delivery of four Bell Huey II helicopters; retraining pilots and technicians at Bell Helicopter Textron Inc Training Centers, delivering spare parts and supplies for two years and 300 flight hours per year; delivery of helicopter maintenance tools and test equipment for maintenance level I and II; delivery of ground equipment for helicopter service and delivery of technical documentation for aeronautical maintenance level I and II.

Source: Ministry of Defense of Bosnia and Herzegovina 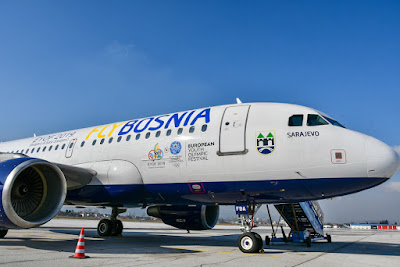 Largest market for charter flights out of Sarajevo during summer months is Antalya in Turkey, with approximately 50.000 Bosnian tourists visiting Antalya Riviera every year. The summer season of 2020 will be remembered as a first one for a domestic Bosnian airline carrying majority of tourist from Sarajevo to Turkey. Fibula travel agency has signed agreement with FlyBosnia to operate 93 one-way (186 round-trip) flights between Sarajevo and Antalya. FlyBosnia will start with two weekly flights from May 25, 2020 to June 12, 2020,  increasing to  daily flights from June 14, 2020. to September 12, 2020. From September 15, 2020 to September 26, 2020. the airline will operate 7 one-way (14 round-trip) flights. 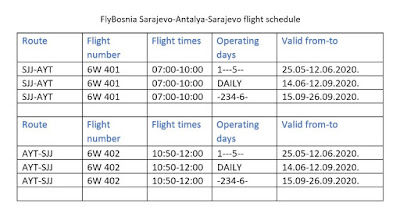 ✈Sarajevo and Tuzla statistics for November 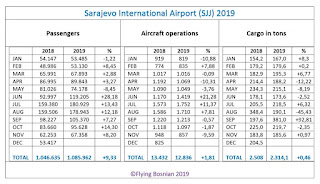 Tuzla Airport recorded double digit growth in November, handling 35.484 passengers, an increase of 15,34% or 4.721 passengers more when compared to the same month of the last year. Number of aircraft operation was almost the same as last year, but very high load factor on all flights contributed to 15% increase in passengers. Year to date Tuzla Airport recorded 551.466 passengers, representing an increase of 1,16% or 6.348 passengers more. The month of December should see another month with double digit growth due to Christmas and New Years holiday travels. The airport is expecting to finish this year with 595.000 passengers. 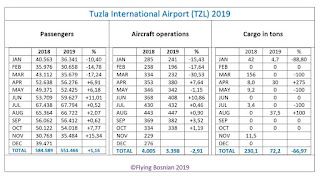 ✈ Bosnia and Herzegovina takes full control of its airspace ! 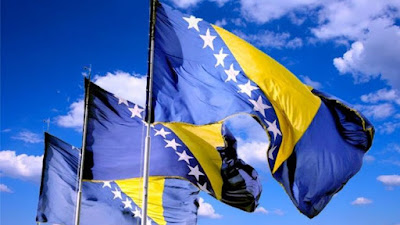 Bosnia and Herzegovina has taken  full control of its air space on Thursday December 5, 2019. for the first time ever after its 1990's war of independence led to a period of oversight by international peace forces. Control over its air space was maintained by NATO-led peace forces from 1995 until 2003 when it was transferred to neighboring Serbia and Croatia while Bosnia built up and modernized its own system.
“This is the first time ever that Bosnia and Herzegovina takes control of its air space and it is an enormous success, bearing in mind that (neighboring) Montenegro, a NATO member, does not control its own skies,” Davorin Primorac, head of Bosnia’s Air Navigation Services Agency (BHANSA), said on Wednesday.

Bosnia and Herzegovina  took control of air space below 10,000 meters (33,000 feet) in 2014 following a 10-year project to establish its own air navigation management system and after the training of some 400 staff. Serbia and Croatia retained control above 10,000 meters just as they were doing when all three countries were republics in the former Yugoslav federation.
Primorac said it had taken decades for Bosnia and Herzegovina to take over its air space because its 1992-95 war, had devastated majority of infrastructure and equipment and left it short of skilled workers.

After taking over its air control service from Croatia and Serbia, BHANSA’s budget would rise to 72.5 million Bosnian marks ($41 million) in 2020 from 60 million marks this year" he added.

Source:Reuters
Posted by Flying Bosnian at 7:25:00 PM No comments:

✈Tonight BHANSA is taking over control of the entire airspace of Bosnia and Herzegovina! 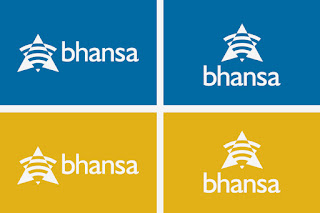