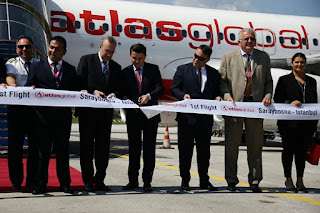 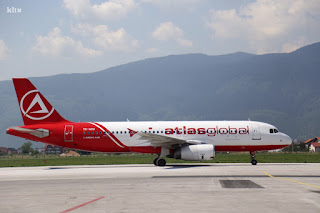 Sarajevo airport director, Armin Kajmaković said:
"We are delighted to have Atlas Global arrivals at Sarajevo airport. The airline with a fleet of 26 modern Airbus aircraft is already flying to 50 destinations in 35 countries in Europe and Asia, and is now recognizing Sarajevo and Bosnia and Herzegovina as a promising tourist and business destination. Atlas Global offers another option to Istanbul and Turkey's largest airport Ataturk, which is one of the largest transfer centers in the world. " 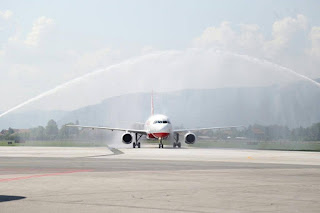 AtlasGlobala director Recep Zeman said:
" With the start of Sarajevo flights, the company continues to expand its network to the west. This year new lines were added to our network in Europe, the Middle East, Ukraine, Russia and the CIS region. We have increased the number of destinations to 50. In Bosnia and Herzegovina, as well as in each of our markets, we will try to become the preferred airline selected by passengers. We believe that our new established line to Sarajevo has a bright future. "


A ceremony at the airport was attended by numerous guests, including the Turkish Ambassador to Bosnia and Herzegovina, Mr. Haldun Koc. 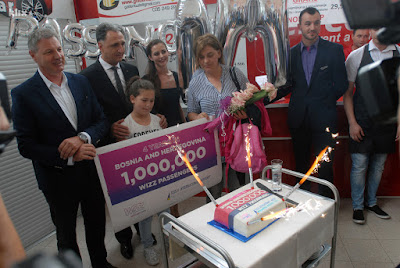 Tuzla, 14 June 2017: Wizz Air, the largest low-cost airline in Central and Eastern Europe, and Bosnia and Herzegovina’s leading airline, celebrated today a new passenger record along with remarkable achievements of four years of operations at Tuzla Airport. WIZZ’s lucky 1 millionth passenger was travelling from Mulhouse to Tuzla and was greeted upon arrival with a WIZZ return ticket.
Wizz Air, the pioneer of high quality and low-fares air travel in Bosnia and Herzegovina, is dedicated to its customers since 2013, when the first WIZZ flight took off from Tuzla to Malmo. Over the past 4 years of successful operations at Tuzla International Airport, WIZZ has carried 1 million passengers on its low fare routes, constantly expanding its operations in the country and bringing even more truly affordable travel opportunities for its customers.
Since the beginning of 2017, more than 189,000 passengers have enjoyed WIZZ’s low fares, easy booking system and excellent on-board service, to and from Tuzla, showing an increase of over 56% compared to the same period in 2016 and have supported over 140 local jobs* in aviation and tourism industry. Already the largest airline in Bosnia and Herzegovina, the WIZZ base from Tuzla represents an investment of more than $ 198 million**, with two allocated aircraft and a local staff of more than 65 aviation professionals. Furthermore, WIZZ offers in total nearly 687,000 seats on sale on Tuzla routes in 2017, increasing its yearly total capacity with more than 90%.
Looking to provide the lowest fare possible, WIZZ is offering now tickets from as low as BAM 19.99***, to 16 destinations in 7 countries across Europe from Tuzla, stimulating bi-directional tourism and boosting trade links  between the countries. Passengers travelling on WIZZ low-fare routes from Bosnia and Herzegovina can discover in total 17 destinations across 8 countries in Europe and beyond, from Sarajevo and Tuzla, including the newest connections from Tuzla to Växjö, Bratislava, Cologne or Nuremberg. During 2017, 6 new routes to 4 countries have already commenced from Bosnia and Herzegovina, along with adding Sarajevo as its second Bosnian airport and introducing the exciting low-fare connection to Budapest.
Speaking at a press conference in Tuzla, Sorina Ratz, Communications Manager at Wizz Air, said: ” After four years since the start of our Tuzla operations, Wizz Air is celebrating remarkable results and a new passenger record, reaching the first million carried passengers in Bosnia and Herzegovina. As the leading airline in Bosnia and Herzegovina, our investment in the country created affordable travel opportunities for our passengers and since the beginning of 2017, our traffic increased with more than 56%, compared to the same period in 2016. In 2017, we expanded our Tuzla offer to a total of 16 services across 7 countries, allocated a second aircraft and created more local jobs. We look forward to continuing our fruitful partnership with Tuzla International Airport and remain committed to bringing even more exciting opportunities that can best meet our customers’ needs, while further stimulating economic and business relations in the country.”
The Prime Minister of Tuzla Canton, Bego Gutić at today’s press conference, said:” The progresses made, 16 destinations and one million passengers carried surely mark a result that deserves only words of congratulations aimed at Wizz Air and Tuzla International Airport. We hope and wish that the next million passengers will be carried by the end of 2018.
It is not an impossible task to achieve.
With another positioned aircraft and introduction of some new, attractive destinations, the next milestone is closer than we think.
This would also represent an invitation to our partners, Wizz Air with whom we cultivate friendship, due to the fact that Tuzla Airport and The Government have implemented activities on increasing the capacity of the terminal building”.
General Director of the Tuzla International Airport, Rifet Karasalihović said:” With the number of operations increased by introduction of new routes from Tuzla International Airport, as well as the increase of passenger flow, came a necessity of expanding and overhauling the passenger terminal building, in order to meet the needs of passengers travelling from Tuzla International Airport.
At the moment, Tuzla International Airport is implementing its project of passenger terminal expanding and overhauling. First of two planned stages should commence by the middle of July 2017, while the second one should start after the announcement of tender competition, hopefully this week.
The investment for the project is valued at 6.5 million BAM in total, of which 70% of the funds have already been secured while the remaining 30% should be secured by the end of July”.
Source: Wizz Air

Tuzla International Airport continued with double digit growth in May. The airport handled total of 47.701 passengers. Wizz Air transported a total of 47.673 passengers on 324 flights, while 28 passengers were transported on general aviation and business flights. Wizz Air cabin load factor on its flight from and to Tuzla in the month of May stood at 80,02% averaging 147 passengers per flight. 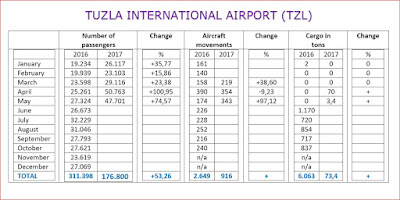 With the beginning of winter timetable Eurowings will start two weekly Dusseldorf -Sarajevo flights. Flights will operate on Thursdays and Sundays, beginning November 02.2017. Flights will be operated by Air Berlin Airbus 320 aircraft and crew . Flights are available for bookings on Eurowings.com Duesseldorf will be third destination for Eurowings from Sarajevo joining Cologne and Stuttgart. 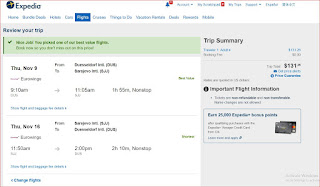 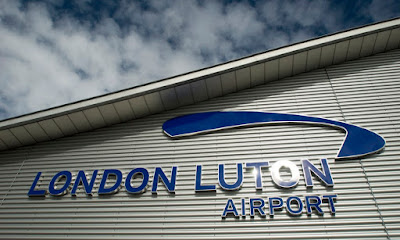 Tuzla- London Luton Airport (LTN) flights are slowly showing increase in passengers as summer months are approaching. During month of April a total of 2.443 passengers traveled between two airports, representing best month so far. Wizz Air inaugurated flights from Tuzla to London Luton on October 31. 2016. Flights were operated twice weekly until the end of December, when flights were reduced to once per week due to low bookings. Twice weekly flights were reintroduced back again at the end of March. Tuzla-London Luton is the only air link between Bosnia and Herzegovina and the UK, but due to visa requirements for holders of Bosnian passports  and very long and expensive process to obtain UK visa travel to the UK and Ireland is still very low. European Union has abolished visas for holders of Bosnian passports in December of 2010 except the UK and Ireland. Wizz Air is expecting solid bookings for the summer season with mostly British tourists visiting Bosnia and Herzegovina as well as Bosnians living in the UK. 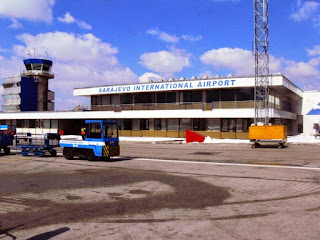 Sarajevo Airport Terminal A (soon to be demolished)

Sarajevo International Airport announced tender seeking a firm to carry out work on the  demolition and removal of the old Terminal A and commercial building, clearing the space for expansion of Terminal B.

The deadline for submission of bids is June 14, 2017. More details on this tender can be viewed HERE.

Planned expansion will increase terminal capacity by 10.000 square meters in terms of space and technology to: meet the needs of passengers and baggage, customs, security, passport and sanitary control on arrival and departure, waiting room for boarding passengers, ambulances, security screening baggage, baggage, waiting room in arrival hall, catering facilities, duty free shop, office and commercial space for the needs of airlines and other agencies, space for religious needs and all other airport and airlines related services. The project is worth 38 million Bosnian Marks (19,5 milion Euros).

✈Sarajevo Airport statistics for May 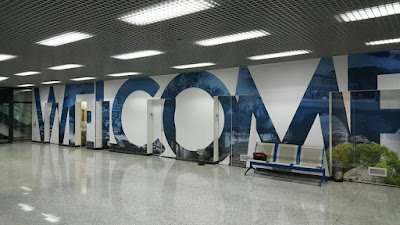 Sarajevo International Airport has recorded 84.137 passengers in May. Number of passengers have declined comparing to the same month of the last year when 85.738 passengers used the airport. Decline in passengers is a result of the holy month of Ramadan, when Muslim population is fasting and traveling is avoided during this month. The airport has recorded increase in aircraft movement and cargo handled. Sarajevo Airport is expecting very busy summer especially during July and August when majority of tourists from United Arab Emirates, Qatar, Kuwait and Saudi Arabia visit Bosnia and Herzegovina. Many new flights are scheduled for upcoming summer season including new flights from Riyadh and Kuwait. Flydubai is drastically increasing its flights from Dubai to double daily beginning June 23rd. Air Arabia will fly once daily from Sharjah to Sarajevo beginning June 22nd. Nesma Airlines will start with flights from Riyadh to Sarajevo on June 24th, offering 5 weekly flights. It is projected for Sarajevo Airport to handle 120.000 passengers in July, 125.000 passengers in August and 100.000 passengers in September.