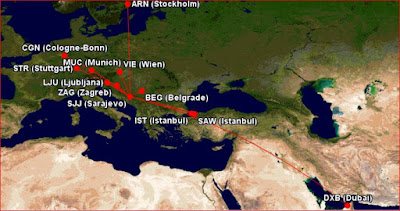 Map of destinations
Flight reductions
In upcoming winter timetable starting on the 30th of October, Sarajevo International Airport will see reduction of flights on the most popular routes from the city; Sarajevo-Istanbul and Sarajevo-Vienna. Turkish Airlines will reduce its twice daily service between Istanbul Ataturk Airport and Sarajevo to 10 weekly flights. Due to weather conditions in winter months and well known Sarajevo fog and very low visibility, Turkish Airlines has moved its morning arrival flight from 08:00 am to 11:00 am, which will allow airline to avoid early morning Sarajevo fog, causing almost daily flight delays and diversions to other airports in the region. Austrian Airlines will reduce its flights from 13 weekly from last year to 12 weekly this year. During winter, Sarajevo will lose direct connection to Zurich as well, since Swiss Air has decided to convert its three weekly flights from year round to summer seasonal. Air Arabia, also converted, its earlier announced year round, twice weekly service, from Sharjah in United Arab Emirates to Sarajevo to summer seasonal.

Very limited connectivity
Sarajevo Airport has very limited number of connections to major hubs in Europe: Amsterdam, Frankfurt, London, Paris, Brussels...etc, and with Swiss Air dropping Sarajevo during winter months, Sarajevo is losing yet another important connection to Europe, putting Sarajevo on the list of the worst connected capital cities in Europe, when comes to air transport. Major problem for the airport is that it does not have "home" air carrier and is lacking presence of low cost carriers, due to high airport taxes and expensive landing and handling fees, making the airport unattractive and unpopular with the airlines. The airport administration is lacking in the departments of route development, promotion, marketing and in incentives to bring air carriers to open new routes and base aircraft at the airport. Only 11 destinations will be served from Sarajevo in upcoming winter (9 in Europe and 2 in Asia)!

New in 2017!?
Possibility of Croatia Airlines to open base at Sarajevo Airport in 2017 has been surfaced, but no official confirmation did come from the airline. Only one new air carrier with one new destination has been confirmed for the next year; Qatar Airways with three weekly flights from Doha (Hamad International Airport), Qatar to Sarajevo.

Source: FlyingBosnian
Posted by Flying Bosnian at 3:11:00 AM