✈Turks are interested in the expansion of Sarajevo International Airport 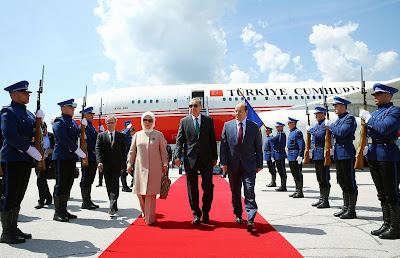 
During yesterdays visit to Sarajevo, high Turkish delegation, led by the President of Turkey Recep Tayyip  Erdogan,  was said among other things, importance of investments in transport sector in Bosnia and Herzegovina. Turkish delegation is mainly interested in expansion of Sarajevo International Airport. This is coming as a logical step, since Turkish Airlines is number one airline by transported passengers and operated flights from/to Sarajevo. Whether, this involves concessions, such as is the case with the airports in Macedonia, which has brought its two airports to expend rapidly, with the takeover by the Turkish consortium TAV Airports, or something else, the time will show. Future meetings are announced at the ministerial level. Sarajevo International Airport play very important role in development of Bosnia and Herzegovina and enlargement of the airport must be priority for the current owner of the airport in order to meet increasing demand of passengers and airlines for flights to Sarajevo.
Source: FlyingBosnian
Posted by Flying Bosnian at 4:41:00 AM